Perhaps the car should have been a black model.  I guess this was literally an accident waiting to happen.  A car just had to crash into one of those 'Thank you for driving carefully'
signs.

James McGregor writes in saying the
car is a BMW 325i Coupe (otherwise known as the 'Individual'), manufactured
between 1992 and 1993.
The eagle eyed amongst you may also spot CinQue Ports on the signpost.  The original CinQuePorts were, Sandwich, Dover, Hythe, Romney and Hastings.  Two more towns, Rye and Winchelsea were later added.
Naturally, the country is England.

The Red Flag Act was the popular name for the Locomotive Act of 1865, in
the UK which put severe restrictions on the steam carriages then being
developed.

They were limited to 4 mph (6.4kph) in the country and 2 mph in
towns, and they had to be preceded by someone on foot, at least 60 yards
(55m) ahead, carrying a red flag.  See etching to the right.

The first person to be killed in an automobile accident in the USA was
Henry H. Bliss, a 68-year-old real estate broker.  On September 14,
1899, in New York City, Mr Bliss stepped from a streetcar, turned to assist
a woman passenger, and was hit by a cab.

The Travellers Insurance Company probably issued the first accident
policy in the United States to James Bolter of Hartford, Connecticut, in
1864.  The policy covered Mr Bolter for his walk from his job at the
Post Office to his home on Buckingham Street. Cost of the premium: 2 cents
per annum.

It's signs like this make that for unfunny car safety incidents. 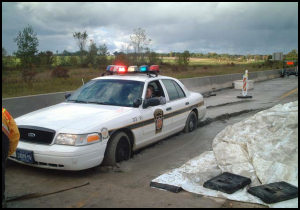 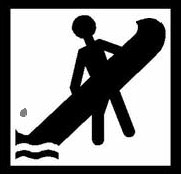 Ever since then France has been putting up funny road signs.  The most
notorious are the 'Toutes Directions' (all directions).  For total
confusion these signs are often placed next to another sign offering Autre
Directions (other directions).

Brussels is home of the European Parliament and in true paralysis by regulation,
they have not only have 'Toutes Directions' signs, but also a second sign
translated into Dutch.

The latest French offering looks like a man trying to extinguish a monster
cigar.  Officially, this funny looking sign means - 'You can launch your
canoe here'. 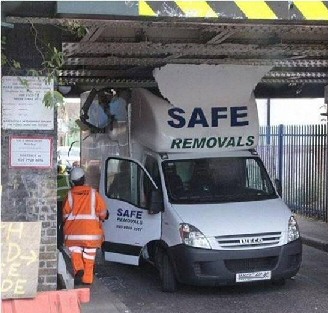 Forget car safety, check out these
lorry drivers in Bolivia