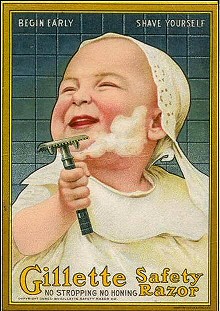 Following an interesting and fascinating article by Hermione Hoby in
the Observer newspaper in August 2010 where she looked at advertising in
the "olden days".  Will and Guy decided to search the internet to provide
a barrel load of laughs for our readers and viewers.

Hilarious, Yet Amazing Adverts From
a Bygone Era

The following adverts need little or no explanation to encourage you to
smile or perhaps even guffaw out loud.  We categorise these bygone
times adverts as
dangerous, sexist, ageist and generally totally out of touch with the values
in the 21st Century.

Guy thinks that Stephen Leacock's view on adverting is a sound and
amusing one: 'Advertising may be described as the science of arresting the
human intelligence long enough to get money from it.'

In 1965, President L.B. Johnson enacted a law in the USA requiring
cigarette manufacturers to put health warnings on their packets.
Here are examples of why he took this strong action.

Preamble:  Guy says these advertising quotes are
dynamite, I had to read some of these authors sage words twice to get the
full significance.  Will points out that while bygone adverts are
completely out-of-touch with the 21st century, these remarks are still
poignant today.

Let advertisers spend the same amount of money improving their product
that they do on advertising and they wouldn't have to advertise it. Will
Rogers

The trouble with us in America isn't that the poetry of life has turned
to prose, but that it has turned to advertising copy. Louis Kronenberger

It is difficult to produce a television documentary that is both incisive
and probing when every twelve minutes one is interrupted by twelve dancing
rabbits singing about toilet paper. R. Serling

Advertising is the rattling of a stick inside a swill bucket. George
Orwell

Advertising may be described as the science of arresting human
intelligence long enough to get money from it. Stephen Leacock

Doing business without advertising is like winking at a girl
in the dark. You know what you are doing, but nobody else does. Stuart H.
Britt

Half the money I spend on advertising is wasted; the trouble is I don't
know which half.  John Wanamaker

Because advertising has to be so direct, it makes the sexism all the more
obvious. These examples of outrageous stereotyping make Will angry, and Guy
cry with laughter.

It is our job to make women unhappy with what they have. B. Earl
Puckett 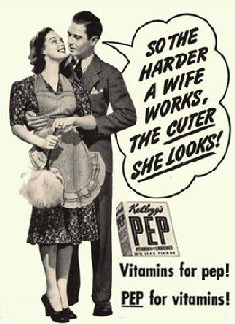 Look
this ad over carefully. (See right)  Circle the items that you want for Christmas.
Show it to your husband.  If he does not go to the store immediately,
cry a little. Not a lot, just a little. He'll go.  He'll go

A Funny Advert From Bygone Times

When Gerber first started selling baby food in Africa, they used the
same packaging as in the USA with the baby on the label.  Later
they found out that in Africa companies routinely put pictures on the
label of what's inside since most people can't read.

Even The Aged Are Not Spared

Guy says 'what is this drug to control senility?'  Will says, 'just give him another
whisky instead.'

Will and Guy's Top Ten Hilarious and Funny Advertising Trivia 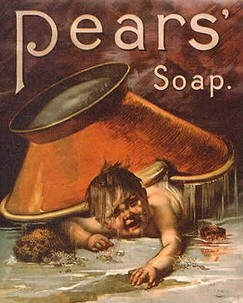 Footnote:
Please send us your adverts from bygone times.