Will and Guy's collection of amusing bull pictures and funny stories.

What do you call a sleeping bull?
A bull-dozer!

An irate bull caused traffic chaos in Scotland recently after escaping
from a field with a bucket stuck on its head.

Will and Guy were told that the large bull caused chaos after wandering
blindly onto a busy road in South Ayrshire, Scotland, just after lunchtime
recently having escaped from a nearby field.

Frustrated motorists were left stranded in lengthy tailbacks on the A77
Ballantrae to Girvan Road as the rampaging bull blocked all moving traffic.
Police were quickly called to the scene, as the visibly distressed animal
struggled to free its head from the round metal dish.

There were delays for more than 45 minutes along the road as police
services dealt with the incident, according to local media reports. 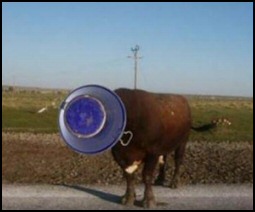 The farmer who owned the bull was eventually alerted to the breach of
security before managing to gain control of his escaped livestock. After
removing the feeding tray from his animal's head, the farmer also saw to
repairing his trampled security fence.

We have a picture here:
Guy says it looks like a hat.
Will says
that colour does not suit him.

Here is the situation, Jenny the farmer's
wife looks out of her window.  What does she see but a bull in a field with
his head caught between the bars of a feeder.

Jenny calls the fire brigade.
Their siren only makes the bull more agitated.  When they appraise the situation they realise they are not equipped to deal with cattle, so they phone for the RSPCA inspector to help free the animal.

Six hefty firemen and the inspector push and pull the
beast and eventually they wrestle its head from between the bars.

The bull was, by now, very angry and turned snorting at the men and began to attack them.
Fearing for their life, they hide in the animal feeder.
Whereupon the farmer's
wife burst into tears of joy followed by tears of laughter.

Jenny was now able to rescue the rescuers.
All she did was get the bull's
old milk bottle, half fill it with milk, put on the teat, and use it to lead the bull from the animal feeder into the farmyard and close the gate. 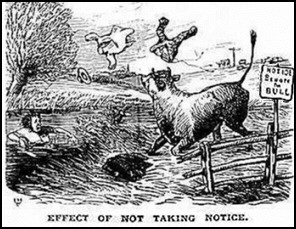 You have probably heard the expression, 'Like a Bull in a China Shop' but
how about a like a bull in a family home?  We have learned that a red-brown Limousin bull which escaped from a farmer near Aachen, Germany, later
careered through a house.

'It came in the back and went out the front,' reported a surprised Police
spokesperson.  Having done a grand tour of the house inspecting the hall,
kitchen and living room the bull left by the front door Will and Guy have
been informed.  On its destructive way it managed to create nearly £8,000
[$16,000 USD] worth of damage. No people were hurt while the bull ran riot
we are pleased to say. However, the bull was later put down. 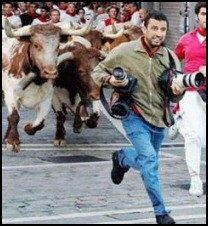 The Pamplona bull run takes place from the 7th to 14th July.
The human runners are clad in white with a red neckerchief. The run starts
at 7.30am.  For the bull run, the streets are walled off so that the bulls can't escape
into the town.

Farmer John got into his Toyota 4 by 4 and drove to the neighbouring
ranch and knocked at the door. A young boy, Steve, aged about 9, opened the
door.

'How about your brother? Is he here?'
'He went with Mom and Dad,' explained
Steve patiently.

Farmer John stood there for a few seconds, shifting from one foot to the
other and muttering to himself.

'Is there anything I can do fer ya?' Steve asked politely. 'I know where
all the tools are, if you want to borrow one. Or maybe I could take a
message fer Dad.'

'Well, it's difficult,' answered John uncomfortably, 'I really wanted to
talk to yer Dad. It's about your brother Ralph getting my daughter pregnant.'

Steve considered for a moment, 'You would have to talk to Pa about that,'
he finally conceded. 'If it helps you any, I know that Pa charges $750 for
the bull and $80 for the hog, but I really don't know how much he gets fer
Ralph.' 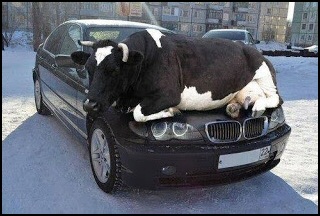 As reported in the Guardian (UK).

Can't help thinking it must be a photo-shopped spoof as I've found the
same picture in several places!

Apparently, Surrey Road Police tweeted, "Remember, as days get colder
animals are attracted to the warmth of cars." I always thought it was bad
enough having the cat's paw prints all over the bonnet!