Here is Will and Guy's collection of funny bridge pictures and amusing
articles about crossings.

Those who jump off a bridge in Paris are in Seine.

Did the Earth Move?

Will and Guy ponder as to what happened here.  Was there an earthquake?
Or was it just a planning mistake?

The End Is Near?

Ole is the pastor of the local Norwegian Lutheran Church, and Pastor Sven
is the minister of the Swedish Covenant Church, which is just across the
road.

One day they join forces and are seen pounding a sign into the ground,
which says:

As a car speeds past them, the driver leans out his window and yells,
"Leave people alone, you Skandihoovian religious nuts!"

From the curve they heard screeching tires and a big splash. 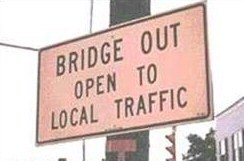 Here are more amusing pictures of buses on river crossings.

Where
Did the Bridge go?  How Did the Bus Get Stuck There?

One Unlikely
Explanation of the Funny Bus on the Bridge

Darragh O'
Malley was driving his lorry when he saw a bridge with a
sign saying 10 foot max. headroom. He slowed down wondering if he could drive under it or not.

'A shure I'll give it a go,' he thought only to find that his lorry got stuck underneath it.

Darragh
sat back in his seat, poured out a cup of tea and lit a cigarette. A policeman arrived a short time later and knocked on the cab door which Darragh immediately opened.

'What do you think you are doing?'
demanded the policeman in a sharp tone.

'Sure I'm having me tea break,' replied Darragh.

'And what do you work at?'
enquired the policeman.

Disappearing Bridges: Will and Guy
Investigate 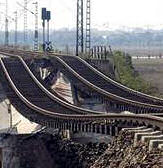 The bridge picture [above] showing a bus and a bridge missing got us thinking
and research has indicated that bridges are stolen far more often than one might
imagine.

Metal bridges can be sold for their scrap value; but Will and Guy find it
amusing that these bridges disappear without anyone noticing, it is not as if
they are small, some are enormous as our photos show:

Police in the western Czech Republic border town of Cheb have launched an
investigation into the theft of a four-tonne railway bridge. 'We are not sure if
it was taken for personal use or for its scrap value,' police spokeswoman
Martina Hruskova reported. 'It is the first time we have dealt with this type of
theft.' 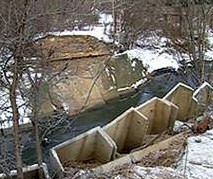 Russian police are hunting scrap metal thieves who stole a 200-tonne metal
bridge in a night-time raid. The bridge in Khabarovsk in eastern Russia vanished
overnight and was part of the only road leading to a local heating plant. Now
staff at the plant have to find alternative routes to work.

Staff at a heating plant were astonished when they discovered the bridge to
work had been stolen. Apparently the cost of replacing the bridge will be ten
times the value of the scrap metal. The bridge was made of four steel pipes half
a metre in diameter and covered with steel plates. The thieves worked at night
when there was no one around, which allowed them to dismantle and remove the
heavy construction without anyone noticing, a spokesman for the heating plant
added. That is that no one noticed until it was time to go to work in the
morning and staff couldn't reach the plant.

Footnote:
Please send us your pictures of funny
bridges.