Biology is a rich source of the double entendre.  Guy is a qualified biology teacher, and Will taught social science. Thus we have experience of this area of humour.

It is well known that the blood contains white cells and red cells. But it is not so well known that white cells come in husband and wife forms. Evidence for this came when the renown medical researcher Dr Sanguine listened to blood with a tiny microphone and heard a white wife cell say, 'The way to a man's heart in through his veins.'
Confucius once said, 'When you breathe, you inspire, and when you do not breathe, you expire.'

Bunny, an unemployed biologist was having considerable difficulty in finding a new job. He finally saw an ad in a local newspaper for a position at a zoo. In the interview, the manager told him that their only gorilla, which had been a star attraction, had recently died, and it would be sometime before they could replace it. Meanwhile, they needed someone to dress up as a gorilla and pretend to be the animal. The biologist was quite embarrassed, but, being desperate for money, he accepted the job. The next day, the biologist put on a gorilla skin and headgear and entered a cage from a rear entrance. Visitors smiled at him and threw bread. After a while, the biologist really got into the act. Bunny jumped up and down, beat his chest and roared as people cheered. The following day, the biologist entered the wrong cage by accident and found himself staring at a lion. The lion roared and rushed toward him. Scared, Bunny, the biologist turned and ran, while screaming, 'Help! Help!' The lion leaped onto the gorilla, knocked him to the ground and whispered in his ear, 'Hey, it's me Laurie, your former co-worker. Shut up or we'll both lose our jobs!'

Students in a Biology class at Wakeford School were taking their mid-term exam. The last question was, "Name seven advantages of Mother's Milk". Gladys, a bright a thoughtful student, was hard put to think of seven advantages. So she wrote: Then Gladys became stuck. Finally, in desperation, just before the bell rang indicating the end of the test, she wrote: It comes in two attractive containers. 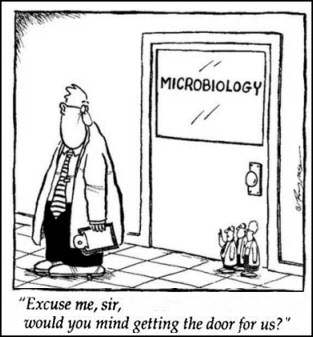 Did you hear about the famous microbiologist who travelled in ten different countries and learned to speak six languages? He was a man of many cultures.

Roger was given an assignment on childbirth and asked to carry out research among his own family. Naturally, when Roger got home he asked his mother, 'How was I born?' 'Well darling ...' said the rather embarrassed mother, 'the stork brought you to us.' 'Oh,' retorted Roger, 'and how did you and dad get born?' Ah, well, the stork brought us too.' 'In that case',  questioned Roger, 'how were grandpa and grandma born?' 'Well darling, the stork brought them too,' answered the mother, by now starting to squirm a little in her embarrassment. Several days later, the boy handed in his paper to the teacher who read with confusion the opening sentence: 'This report has been very difficult to write due to the fact that there hasn't been a natural childbirth in my family for three generations.'

The Following is an Allegedly True Story About an Anatomist

One day after sleeping badly, Bryan Marvick, an anatomist went to his frog laboratory and removed from a cage one frog with white spots on its back. He placed it on a table and drew a line just in front of the frog. 'Jump frog, jump!' he shouted. The little critter jumped two feet forward. In his lab book, the anatomist scribbled, 'Frog with four legs jumps two feet.' Then, he surgically removed one leg of the frog and repeated the experiment. 'Jump, jump!' To which, the frog leaped forward 1.5 feet. He wrote down, 'Frog with three legs jumps 1.5 feet.' Next, Bryan removed a second leg. 'Jump frog, jump!' The frog managed to jump a foot. He scribbled in his lab book, 'Frog with two legs jumps one foot.' Not stopping there, the anatomist removed yet another leg. 'Jump, jump!' The poor frog somehow managed to move 0.5 feet forward. The scientist wrote, 'Frog with one leg jumps 0.5 feet.' Finally, he eliminated the last leg. 'Jump, jump!' he shouted, encouraging forward progress for the frog. But despite all its efforts, the frog could not budge. 'Jump frog, jump!' he cried again. It was no use; the frog would not response. The anatomist thought for a while and then wrote in his lab book, 'Frog with no legs goes deaf.'

Scenario : Johnny takes apart several leftover fireworks from Guy Fawkes night, puts them in a paint tin and blows up a wasp's nest. 1957 - All the Wasps die and are no longer a threat to anyone. 2013 - Police and Anti-Terrorism Squad called. Johnny charged with domestic terrorism, investigate parents, siblings removed from home, computers confiscated. Johnny's Dad goes on a terror watch list and is never allowed to fly on aircraft again.

Students in a Biology class were taking their mock exam.  The last question was, 'Name seven advantages of Mother's Milk.' Max was struggling to think of seven advantages. However, he wrote: And then Max was stumped for the 7th reason. Finally, in desperation, just before the bell, he wrote: 7. It comes in two attractive containers and it's high enough off the ground where the cat can't get it. Max was awarded an A+.

In a fifth-grade class, a teacher asked students various science questions, of which the following were the funniest: Teacher: What is the definition of a protein?' Student: A protein is something that is made up of mean old acids. Teacher: What kind of tails do opossums have?" Student: Reprehensible ones" Teacher: What is the spinal column? Student: A long bunch of bones. The head sits on the top and you sit on the bottom. Teacher: How long does it take the Earth to rotate about its axis?" Student: The Earth makes a resolution once every 24 hours. Teacher: That's wishful thinking.