There have been some terrible road accidents, but this beer disaster must be one of the most exasperating.

Wait a minute in this funny beer pic can I see some intact bottles of Grolsch beer in the second crate from the front?  Does
anyone have a 10-20 on this Big-R?

Isn't it funny how history repeats itself?  In February 2009, over
three hundred aluminium beer kegs fell of a lorry, the resulting mayhem
caused the police to close the M11 motorway.

While it is true that the accident happened just outside the village of
Ugley in Essex, England, the rumour that beer was lapped-up in half an hour
by a passing bus load of Irish rugby fans, is not true.  It took them 4
hours.

An Australian touring rugby team was being driven through Dublin in a bus.  The driver was giving a running commentary as they went. 'We are just passing the biggest pub in Dublin',
said the driver.

'Why?'  A voice piped up from the back of the bus.

"And don't buy wine instead, like you did the last time, do you
remember?!"
"Of course I remember..."

Will
Drives Rest to Bottle Bank

Guy is in there somewhere!

Out With the Glass Bottles - In
With the Can of Larger 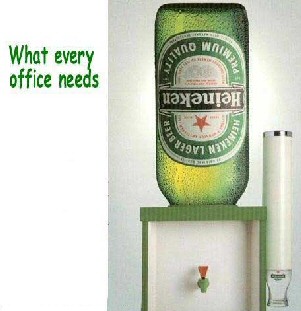 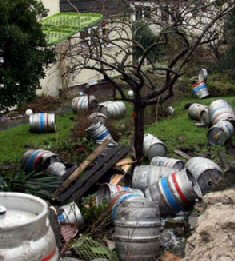 A number of runaway barrels caused mayhem after a brewery dray dropped its load in a quiet Somerset village.  About 100 metal kegs, barrels and
bottles rolled into gardens in Pecking Mill, near Shepton Mallet, battering flower displays and spraying beer over nearby homes.

The accident is thought to have caused damage worth thousands of pounds, and
left residents in shock. The 14-metre articulated lorry toppled while taking a sharp bend on the A371, a stretch of road known locally as an accident black spot.

'Well, Dad, it shows that if you drink alcohol, you will not have
worms.'

In the middle ages in the UK, "nunchion" was the word for liquid lunches.
It is probable that it originated from a combination of the words "noon
scheken", or noon drinking. In those days, a large chunk of bread was called
lunch. So if you ate bread with your nunchion, [nuncheon] you had what we
still today call a luncheon. 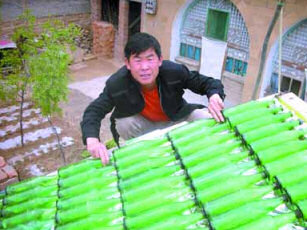 A Chinese farmer has made his own solar-powered water heater out of beer bottles and hosepipes.

'I invented this for my mother. I wanted her to shower comfortably,' says Ma Yanjun, of Qiqiao village,
Shaanxi province. Ma's invention features 66
beer bottles attached to a board. The bottles are connected to each other so that water flows through them.

Sunlight heats the water as is passes slowly
through the bottles before flowing into the bathroom as hot water, reports China Economy Network. Ma says it provides enough hot water for all three members of his family to have a shower every day. More than
10 families in the village have already followed suit and installed their own versions of Ma's invention.

Beer - So much more than a breakfast drink