The English call a bartender a barman.  Just for once, I believe that the Americans have the better word.  Bartender is a much more expressive word than barman or barperson.  In many ways, bartender is
a word ahead of its time, in that it's gender neutral.

Will and Guy have made a special study of bartenders and we believe that Ireland has the best supply of story-telling bartenders.  Here
are some of the best bartender stories that we have collected.

The Drinks Are On Me

A drunk walks into a bar and says to the bartender [with a drunken slur], 'Bartender, buy everyone in the house a drink, pour yourself one, and give me the bill.'

The bartender slaps the guy around a few times then throws him out into the street.

The very next day the same drunk walks into the
bar and once again says [with a drunken slur], 'Bartender, buy everyone in the house a drink, pour yourself one, and give me the bill.'

possibly be stupid enough to pull the same trick twice,  so he gives him the benefit of the doubt, pours a round of drinks for the house, has a drink himself and hands the drunk a bill for $67.00.

The bartender can't
believe it. He picks the guy up, beats the living daylights out of him, then throws him out into the street.

The next day the same drunk walks back
into the same bar and says [with a drunken slur], 'Bartender, buy everyone in the house a drink, give me the bill.'

In disgust, the bartender says, 'What, no drink for me this time?'

The drunk replies, 'You! No Way! You get too violent when you drink.'

Lecture Tour
With A Difference

After an evening out, Roger was in no shape to drive, so he sensibly left his car parked and walked home. As he was staggering along, he was stopped by a policeman. 'What are you doing out here at three
o'clock in the morning?' asked the police officer.

'I'm on my way to a lecture,' answered Roger.

'And who on earth, in their right mind, is going to give a lecture at this time of night?' enquired the
constable sarcastically.

'Tell me, Ronan, how did you manage to get so very drunk last night?' asked the parish priest.

'Well you
see, Father, it was like this. I got into very bad company after winning a bottle of whiskey at a raffle.'

'But you were with Mick McGahey, Ryan O'Toole, and Patrick McCann and they don't drink.'

Mike, an alcoholic,
staggered into a bar and, after staring for some time at the only woman seated there, walked up to her and gave her a kiss. She jumped up and slapped him really hard.  Mike immediately apologised and
explained, 'Look, I'm sorry. I thought you were my wife. You look exactly like her.'

'Why you worthless, insufferable, wretched, no good drunk!' she bellowed at the top of her voice. 'Funny,' Mike
muttered, shaking his head, 'you even sound exactly like her.'

Donncha Cleary walked into a bar in Dublin and asked the barman if he had heard the latest Kerryman joke.

'I'm warning you,' said the barman, 'That I come from Tralee in Kerry meself.'

George, the bartender, asks the Hillbilly, who is sitting at the bar,
'What'll you have?'

George hands him the drink, and says, 'That'll be $7.60,' to which the
Hillbilly splutters, 'What are you talking about? I don't owe you anything
for this.'

Roger, a lawyer, sitting nearby and overhearing the conversation, then
says to George, the bartender, 'You know, he's got you there. In the
original offer, which constitutes a binding contract upon acceptance, there
was no stipulation of remuneration.'

George was singularly unimpressed, so he says to the Hillbilly, 'OK, you
beat me for a drink. But don't ever let me ever catch you in here again.'

The next day, the Hillbilly again, walks into the bar. George glowers and
rasps, 'What the heck are you doing in here? I can't believe you've got the
audacity to come back! 'The Hillbilly smiles and says, 'What are you talking
about? I've never been in this place in my life!'

George looks at the Hillbilly closely and mutters, 'I'm sorry, but this
is uncanny. You must have a double. 'The Hillbilly, without missing a beat
says, 'Thank you, bartender.  Make it a scotch.'

A
Man, His Giraffe, and the Barman

A fellow walks into a bar with a giraffe and they sit down on two stools at the front and the guy says to the barman, "Two beers please barman."

The barman pours them two beers and the giraffe grabs his
and drinks it down in one go and his mate follows suit. The guy then says again, "Another two beers please barman." The bartender pours two more beers and once again the giraffe necks his and his friend does
likewise. This goes on for a fair while with the giraffe and his companion downing beer after beer after beer.

The two have had about 17 beers each when the guy looks over at the giraffe who is starting to
wobble on his stool .... his wobbling gets worse and worse and eventually he just passes out and falls backwards off the stool onto the floor.

The guy looks at him and then gets up off his stool and starts
walking out of the bar.

The barman then yells at the guy as he is leaving, "OY...you can't leave that lyin' there."

The man looks at the giraffe and then replies, "That's not a lion that's a giraffe,"
and walks out. 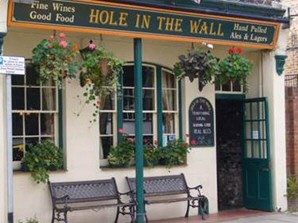 A man has had a drink at his 45,000th pub in Great Britain.  Bruce Masters
from Bedfordshire, England started visiting pubs in 1960 and has since drunk
more than 25,000 pints of ale, travelling around one million miles across
Great Britain.

'Amazing!' comment Will and Guy. 'The cost of all those pints must run
into the thousands of pounds.'

However, Mr Masters informed us that, 'There are still a great many pubs
I have not been to. If something is worth doing, it is worth doing
properly.'

Mr Masters keeps a record of all the pubs he has entered on his computer.  The list includes bars at airports and on trains.

When we asked whether his wife minds his fascination with pubs, Bruce
replied, 'She does not begrudge me doing this. She just prefers to stay at
home.'

His most recent visit was to the "Hole in the Wall" pub in Portsmouth
which is only a stone's throw from Will's local:Duke
of Buckingham

Footnote:
Please write to Will and Guy if you have a
funny bartender story.