Will and Guy have selected funny Australian stories which reflect this
independent continent at the bottom of the world.

Sheila didn't come home one night.  When Bruce asked her where she'd
been she said she spent the night at a girl friend's house.

Bruce was a bit suspicious she'd been "rooting around" so rang her ten
closest friends, but none of them had seen her.

The following week Bruce didn't come home one night. Sheila asks him
where he'd been.  So Bruce says he got a bit drunk at a mate's place
and thought it was safer not to drive but crash out there.

Sheila thinks he's been "rooting around" so rings his ten best mates.
In true Aussie style - eight of them say he spent the night there and two
claim he's still there.

Jay, an American, was commissioned to write a book about famous churches
around the world. Firstly, Jay bought a plane ticket and took a trip to
Columbus, Ohio, USA, thinking that he would start by working his way across
the USA from East to West.

On his first day he was inside a church taking photographs when he
noticed a golden telephone mounted on the wall with a sign that read
"$10,000 per call".

Jay was intrigued so he asked a priest who was strolling by what the
telephone was used for.

The priest replied that it was a direct line to heaven and that for
$10,000 you could talk to God. Jay thanked the priest and went along his way.

Next stop was in Des Moines, Iowa and there at a very large cathedral, he
saw the same looking golden telephone with the same sign under it. Jay
wondered if this was the same kind of telephone he had seen in Columbus and
he asked a nearby nun what its purpose was.

She told him that it was a direct line to heaven and that for $10,000 he
could talk to God. Seriously polite, Jay thanked the nun for her help.

Jay then travelled
all across America, Europe, England, Japan, New Zealand.  In every church he saw the same looking golden telephone with the same
"$US10,000 per call" sign under it.

Jay decided to travel to the southern hemisphere to Australia to see if
they had a similar phone. He arrived at Western Australia, and again, in the
first church he entered, there was the same looking golden telephone, but
this time the sign under it read "40 cents per call."

Somewhat surprised, Jay asked the priest about the sign. 'Father Brian,
I've travelled all over the world and I've seen this same golden telephone
in many churches. I'm told that it is a direct line to Heaven, but in all of
them price was $10,000 per call. Why is it so cheap here?'

Father Brian smiled and answered, 'My son, you're in Australia now -
this is Heaven, so it's only a local call.'

An American Goes To Oz 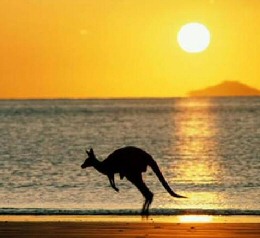 Randy, a Texan farmer goes to Australia for a vacation.  There he meets an
Glen, an Aussie farmer and gets talking.  The Aussie shows off his big wheat
field and the Texan says, 'Oh yeah.  We have wheat fields that are at least
twice as large.'

Then they walk around the ranch a little, and the Glen shows off his herd
of cattle. Then Randy immediately says, 'We have longhorns that are at least
twice as large as your cows.'

The conversation has, meanwhile, almost died when the Texan sees a herd
of kangaroos hopping through the field and so he asks, 'And what are those?'

'Glen', the Aussie replies with an incredulous look, 'Don't you have any
grasshoppers in Texas.' 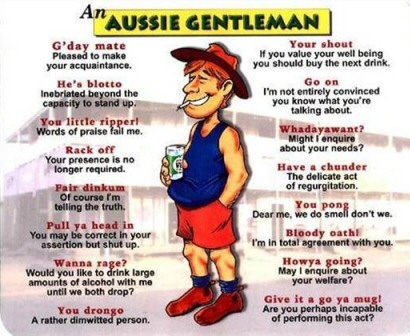 Will and Guy have tried hard to discover whether these amusing Australian
Tales are true or not.  In the end we have decided that they probably
are.

Back in 1948 General Motors introduced an Australian built car, the
Holden. With minor changes they kept building the same model until 1956.
There were supposed to be only about two dozen different keys for the model
so if you had a few different keys the cars were very easy to steal.

A pal of my father's, Kevin Sutherland bought one in the mid 1950s and it
was stolen a few months later.  The village had only about 1100 people so
police didn't have much to search and didn't find it.  Some weeks later
Mr Sutherland went to the Queensland capital, Brisbane.  That was about
750 miles away by road.  While walking down the main street of the city he
saw his car parked almost in front of his hotel.  He rushed to his
room, took his house key ring which still had the car keys on it, and drove
the car to the nearest police station to report he had recovered it.
The newspaper he had bought the day it was stolen was still on the back
seat.

Footnote:
This classic Australian story was kindly sent in by Ken England

With the high rate of attacks on women in secluded parking lots,
especially during evening hours, the Melbourne City Council, Australia has
established a "Women Only" parking lot.

Even the parking lot attendants are exclusively female so that a
comfortable and safe environment is created for patrons.

Please see below for the first picture available of this world-first
parking lot in Australia:

'Sheila's Do Great' - Say Will and Guy, in
Husband-Dragging Contest 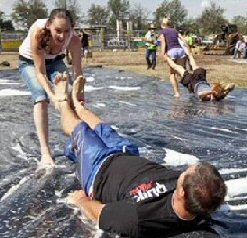 You can't keep a good woman down, say Will and Guy.

We are delighted to inform you that as well as the traditional Wife
Carrying Championships in Singleton, NSW, Australia now the Countryfest
includes the first joint Wife Carrying and Husband Dragging Contest.

We have been told by our Aussie mate, Shane, that the men must act as a
dead weight and be pulled by their partner from a makeshift bar "depicting a
traditional Aussie weekend where the female drags her man out of the pub."

This photograph was taken in the Gulf of Carpentaria, Northern Australia.
They illustrate the unparalleled beaut of the Morning Glory Cloud, a
phenomenon that occurs between September and November each year.

When these clouds form hang gliders and paragliders surf these cloud
waves.  However, they have to be careful because the waves produce
turbulence

Bruce went to the police station and asked to speak to the burglar who
had broken into his house the previous night.

'You'll get your chance in court,' the desk Sergeant Kelly told him.

'I have to know how he got into the house without waking my wife,'
pleaded Bruce. 'I've been trying to do that for years.'

Passport - A
Letter from an Aussie to His Government

I'm in the process of renewing my passport, and still cannot believe
this.  How is it that K-Mart has my address and telephone number, and
knows that I bought a television set and golf clubs from them back in 1997,
and yet the Federal Government is still asking me where I was born and on
what date? For Christ sakes, do you guys do this by hand?

My birth date you have in my Medicare information, and it is on all the
income tax forms I've filed for the past 40 years.

It is also on my driver's licence, on the last eight passports I've ever
had, on all those stupid customs declaration forms I've had to fill out
before being allowed off planes over the past 30 years.

It's also on all those insufferable census forms that I've filled out
every 5 years since 1966.

Also... would somebody please take note, once and for all, that my
mother's name is Audrey, my father's name is Jack, and I'd be absolutely
bloody astounded if that ever changed between now and when I drop dead!

****! What do you people do with all this information we keep having to
provide?

I apologize, Mr Minister. But I'm really pissed off this morning. Between
you and me, I've had enough of all this bullshit!

You send the application to my house, then you ask me for my bloody
address!  What the hell is going on with your mob? Have you got a gang
of mindless Neanderthals working there!

And another thing, look at my damn picture. Do I look like Bin Laden? I
can't even grow a beard for God's sakes. I just want to go to New Zealand
and see my new granddaughter. (Yes, my son interbred with a Kiwi girl). And
would someone please tell me, why would you give a shit whether or not I
plan on visiting a farm in the next 15 days? In the unlikely event I ever
got the urge to do something weird to a sheep or a horse, believe you me,
I'd sure as hell not want to tell anyone!

Well, I have to go now, 'cause I have to go to the other side of Sydney
and get another bloody copy of my birth certificate - and to part with
another $80 for the privilege of accessing MY OWN INFORMATION!

Would it be so complicated to have all the services in the same spot, to
assist in the issuance of a new passport on the same day?

Noooooâ€¦that'd be too bloody easy and makes far too much sense.

You would much prefer to have us running all over the bloody place like
chickens with our heads cut off, and then having to find some 'high-society'
idiot to confirm that it's really me in the goddamn photo! You know the
photo... the one where we're not allowed to smile? You bloody morons.

AUSTRALIAN LETTER - I think the sender might have been upset!

The above  is an actual letter sent to the DFAT (Department of
Foreign Affairs and Trade) Immigration Minister. The Government tried
desperately to censure the author, but got nowhere because every legal
person who read it couldn't stop laughing!

Any truth in the rumour that Brisbane is twinned with New Orleans?

Footnote:
While many of us may smirk at these funny
disaster pictures, our hearts go out to the disaster victims.  Will and
Guy's justification in publishing these images is that humour can help
people come out of the slough of dispair.

Footnote:
Please send us your funny Australian jokes
and stories.