We have a wide variety of funny animal stories, furthermore, these mammalian
tales are interspersed with funny pictures and information that Will and Guy find
interesting. 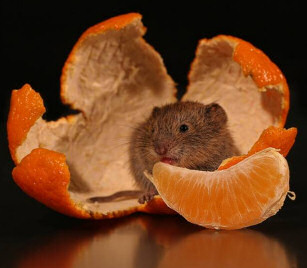 Mrs Dormouse was stealing food from the kitchen with her children, when
Slats, the cat pounced. Encouraging her children to run, Mrs Dormouse shepherded
them towards the mouse hole but it was obvious she wasn't going to make it.

In desperation, she turned to face Slats the cat and shouted 'Bark, Bark'
extremely loudly.

Slats the cat skidded to a halt, turned and ran away.

Mrs Dormouse turned to her children and said, 'You see how important it is to
learn a foreign language.'

Clever Pooch Purchases His Own Sausages

A dog owner in China says his pet is smart enough to buy himself sausages
when he's hungry. Wu Qianhe, of Chengdu City, in China, says his pooch, Lele,
barks to let him know he's feeling hungry. 'I'll drop him one yuan, and he
takes the money in his mouth and runs to the neighbouring shops, which all
know him well,' reports Qianhe.

Lele will not release the money until
he's been given the sausage, Will and Guy have established.  Another
amazing animal story to come from China. 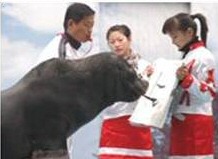 Zoo keepers have reportedly trained a sea lion to write in Chinese.

Now Peter can write the Chinese character
representing a "bull" and he can also sign his work with his own "sea lion"
seal.

After completing his writing, Peter, a six-year-old male, holds the
seal and stamps it on the paper as a signature, Will and Guy have
established. The zoo has informed us that Peter will demonstrate his writing
skills for tourists during the Spring Festival at the zoo.

Jackie Morgan, a nurse from Mynydd
Isa, near Mold, north Wales looked out at her garden and spotted a meerkat

Strange you may well think since the meerkat is found exclusively on the
semiarid plains of southern Africa. However, Will and Guy can vouch for the
veracity of this story

Jackie Morgan says the African animal looked
'rather sorry for itself, standing upright and shivering in the morning
frost.' So she, and husband Keith, 'phoned animal rescue centres, a vet, the
Welsh Mountain Zoo and Chester Zoo, but naturally no one believed them and
most thought it a hoax and suggested it was probably a ferret

Mrs Morgan
set about catching the meerkat which she, by then, had named Monica. 'We put
some nuts out for it so it came in and we captured it in a box and took some
photos of it to send to the doubting authorities; they all phoned back
saying it was definitely a meerkat.' She added, 'We've had it sitting on our
laps and it followed me around everywhere - I think it thinks I'm it's mum.'

"Park The Dog" - An
Amusing Tale

Kerry pulled into a crowded parking lot and rolled down the car windows
to make sure her Irish setter had sufficient fresh air when she went
shopping.

The dog was stretched out on the back seat, and Kerry wanted to impress
upon him that he must remain there. She walked to the curb backwards,
pointing her finger at the car and saying emphatically, 'Now you stay. Do
you hear me? Stay,' in a very firm voice.

The driver of a nearby car
gave Kerry a startled look. 'I don't know about you, lady,' he said
incredulously. 'But I usually just put my car in park.'

What did you say?
Please give me a ride?

See more about the
story of the cat and tortoise.

Another Tortoise with a Baby Hippo

Read the story of Mzee
(tortoise) and Owen (hippo)

Where do you find a hippo?
Depends where you left him.

Elephants Have a Snack

These whales feed on fish but
also otters and seals.

Pandas have one of the biggest contrasts between tiny baby and adult.  They
gain their full size at about 4yrs old and become reproductively mature at
age 6 and live for about 25 years.