It's not that chocolates are a substitute for love. Love is a
substitute for chocolate. Chocolate is, let's face it, far more reliable
than a man. - Miranda Ingram 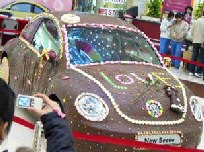 About 200kgs of melted chocolate was spread over the VW Beetle after it was first wrapped
in cling film.  Seven people worked overnight to make sure the chocolate car was ready to go on display on the morning of Valentine's Day. According to China News Network, the car attracted many viewers and
lovers to the dealer in Qingdao city.

Will Commissions Research
Into Chocolate 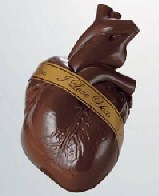 Chocolate set the heart pounding, with heart rates for some of the 12 volunteers rising from a resting rate of about 62 beats per minute to as
high as 145.

Eating chocolate is more stimulating to the
heart and the head than kissing, according to new research conducted in
2010.

The study found that at the point the chocolate melted in the mouth, all regions of the brain received a boost far more intense and
longer lasting than the mental excitement from kissing.

Dr David Lewis, a psychologist formerly of the University of Sussex who led the study, said, 'These results really surprised and intrigued us.'

Dr Lewis, who now runs a private research
company called The Mind Lab, added, 'There is no doubt that chocolate beats kissing hands down when it comes to providing a long-lasting body and brain buzz.'

More Fun "Chocolate" Thoughts from Will and Guy 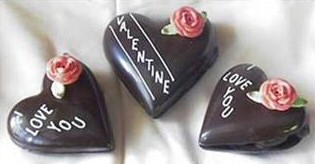 Reasons Why a Chocolate is Better Than a Man

Reasons Why a Chocolate is Better Than a Woman

First soldier:
'Pass me the chocolate pudding, would you?'

First soldier: 'Why not?'

Second soldier: 'Because it's against regulations to help another soldier to dessert.' 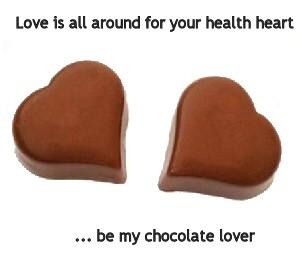 a hershey's kiss under an arbour,
an Oreo cookie on the divan,
a Godiva martini on the lake,
a bittersweet chocolate sliver in my
cake,
i love chocolate.

Thanks to Desiré Hendricks 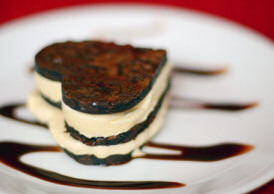 Here is a wonderful idea to make a chocolate Valentine.  Combine, ice-cream, dark
chocolate, brownie mixture and a liqueur to make a wonderful heart-shaped,
mouth-watering desert.

The secret is to make the 'Brownie' biscuit the day before and then assemble
the ice-cream sandwich just before you serve it.

However, making alcoholic ice cream is not easy, it takes practice to get the
liqueur blended and frozen.  The good news is that even if the 'failures'
don't look elegant, the still taste good.

Preheat your oven to 340 degrees.

Mix the liqueur with the instant coffee and vanilla; stir until the coffee is
dissolved. In a large bowl, mix the brownie mixture, eggs and oil; stir
vigorously.  Add the chocolate pieces. Pour mixture into the tin and coax
the mixture out to the edges of the tin.  Place pan in a 340 degree oven.
Bake for 13-16 minutes. When brownies are done to your liking (13 minutes for
gooey), remove from oven and let cool completely on a wire rack.

Carefully place the ice cream shape on top of one brownies and cover with
another brownie. If you have time, repeat this process to create a double-decker
sandwich.  Cover pan of Valentine sandwiches with cling-film (plastic wrap)
and immediately place in the freezer.  After about an hour in the freezer,
the sandwiches can be individually wrapped in plastic if desired.  For
those not on a diet, you could even serve with a dollop of whipped cream.