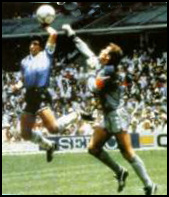 No-one ever won a World Cup single-handedly as Diego Maradona
did in 1986.  Against England that slalom run from half way through the English team, was probably the best goal of any World Cup.

Then we have Maradona's 'Hand of God' goal which deceived the ref and most of the crowd.  Peter Shilton and the camera man seemed the only two to realize that it was
hand not head that guided the ball past the goal keeper.

There is even an urban myth that Maradona was a ball boy performing 'keep me up' in the 1982 final.