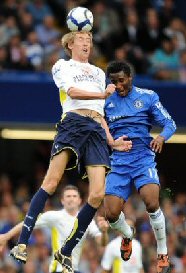 Peter Crouch first came to Will's
attention playing for his local team Portsmouth.  As you may know Crouch is the tallest footballer playing in the top
flight.  We predict that his aerial domination will play a crucial part in England winning World Cup 2006 in Germany.

Sales of Wide Screen T.V. plummet.  The reason England fans realize that they cannot see all of Peter Crouch on the
1333 x 768 pixel models.

The answer is the revolutionary 1333 x 3413 pixel model that Will and Guy are seeking to franchise.

After Peter Crouch, the Liverpool and England football striker, celebrated his goal against Hungary in a pre-World Cup friendly with a 1980's
style robotic dance bookmaker's
in the UK have been taking bets
for the future.

His clever footwork has earned him a quote of 50-1 to win the next pro-celebrity '
Strictly Come Dancing'
TV spectacular where entrants trip the light fantastic in competition.

A better bet is for Peter Crouch to win the '
golden boot'
award [top goal scorer] in the 2006 World Cup.   Will and Guy advise you to get a bet on at the generous odds of 66-1.  You are going
to hear a lot of '
Beckham crosses, and Crouch' scores.  We are not mad about his robotic dance, but trust us, you will get used to his strange celebration routine.

You don't
often see Subbuteo and dance in the same sentence, but here goes.
The robotic dance of gangly England striker Peter Crouch is to be captured in a Subbuteo figure. MB Games hopes to release the figure in time for the World Cup. A spokesman for the firm said, 'The Crouchbop has
really made its way into the public consciousness, so it seems like the right thing to do.'