What we seek is to combine funny pictures, football jokes, videos and funny stories. 'If winning isn't everything, why do they keep score?'  Vince Lombardi.

Commentary to Look Out for: 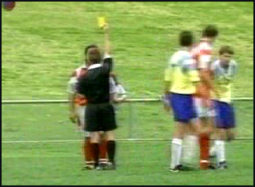 Bernie and Eddie were fortunate enough to have a season ticket to watch Manchester United.  They could not help noticing that there was always a spare seat next (K37) to them and they had a friend who would love to buy a season ticket, especially if all three could have seats together. One half-time Bernie went to the ticket office and asked if they could by buy the season ticket for K37.  The official said that unfortunately the ticket had been sold.  Nevertheless, week after week the seat was still empty. Then on Boxing day, much to Bernie and Eddie's amazement the seat was taken for the first time that season.  Eddie could not resist asking the newcomer, 'Where have you been all season' .  Don't ask he said, the wife bought the season ticket back last summer, and kept it for a surprise Christmas present. 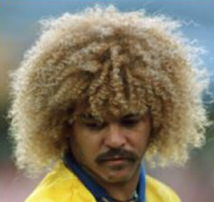 Snow White and the seven dwarfs

One day just outside Leeds, the seven dwarfs went off to work in the salt mine, while Snow White stayed at home as usual to cook their lunch. However, when she went to the mine to deliver their lunches, she found there had been a cave-in, and there was no sign of the dwarfs. Tearfully, Snow White shouted down the mine shaft: 'Hello - is anyone there. Can you hear me, Bashful, Doc, Dopey, Happy, Grumpy or Sneezy?' (She knew it would be no good calling Sleepy.) Then a voice floated up from the bowels of the mine: 'Leeds will win the F.A. Cup'. ' Thank God!' said Snow White, 'at least Dopey's still alive!' See more football jokes and funny stories