As a result of so many dogs out of control, the police have a new training method.

If police dogs do these terrible deeds to
the innocent, what will the do to the guilty?

Football Dog and the Police

Will, Steve and friends went to The Dell in Southampton to watch the home team play Norwich City in the then League Division 1. Both teams were acknowledged as being proponents of good, fast flowing, attacking
first touch football that delighted neutrals like us. The game itself was not really worth commenting on; however, the feast of fun at half time was.

The programme notes had warned us of a Police dog
display at the interval and this began with a hooded, gangster type figure running onto the playing area shouting and brandishing a pistol, which he repeatedly fired into the air. A short distance behind him
came a German shepherd police dog. Just at that moment, one of the police constables in the ground, there for safety control, took off across the field and 'bravely'
rugby tackled the 'pretend'
assailant and
arrested him leaving the bewildered dog nothing to do.

The crowd, of course, roared not only with laughter but its approval of the mistaken arrest.

The PC sheepishly put his helmet back on and
returned to duty at the side. Later he was seen signing autographs.

A delightful interlude to a rather ordinary match. The score?  Do you know I can't
remember.

Amazing Funny Footage.  In this video viral excerpt the crowd quite obviously finds the antics of
the dog very amusing, as do Will and Guy.

Three players were bitten after a police dog ran on to a football pitch during an amateur game. As reported by the BBC on Monday, 28 October, 2002.

The German shepherd fled from his trainer
during an exercise at a disused building close to the pitch.

Craig Jackson (no5) was one of the players attacked.

It headed towards the field and snatched a linesman's
flag before moving towards the players at Scunthorpe's
Brumby Hall ground on Saturday
afternoon.

The injured players Steve Baker, 19, [not Will's
wife] Craig Jackson, 18, and Michael Stones, 18, were bitten on the arms and back and were treated at Scunthorpe General Hospital.

The game
between Appleby Frodingham and Lincoln Moorlands had to be abandoned after the incident.

Lincoln Moorlands manager Martin Burnett said: 'There were two children's
games on the next field and I dread to think what could have happened if the dog had gone on there instead. 'Also the dog wasn't

fully grown and it could have been even worse if it was a larger animal. 'It was scary as the dog was out of control, it was not listening to its handler and nobody could do anything. 'I have been in football
for 22 years and I have never seen anything like this before. '

A Humberside Police spokesman said: 'The people injured have had their injuries photographed, the dog handler has submitted a full report
to the police dog section and we will fully look into what went on. '

Funny Dog Enjoys a Work out on the Match Pitch

Here we can show you a match in Hungary between the famous Honved
Football Club and Haladas where a dog with a sense of humour holds up play.

The only football team named after a dog is the
Terriers (Huddersfield Town).  Bristol and Doncaster ROVERS don't
really count.  Moving on to teams named after cats we have the Tigers
in Hull, and non-leagers Gloucester.

Cat Has Fun at Soccer Match in England 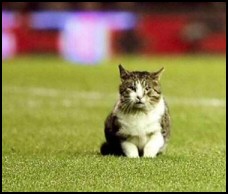 A football [soccer] match at Anfield Stadium, Liverpool, England had to
be halted recently when a stray cat wandered onto the pitch. The grey and
white tabby cat ran toward one of the goals while fans chanted "cat, cat,
cat."   Play was stopped for about a minute while the cat ran
around on the field.

When he darted toward the sidelines, a steward scooped him up. The cat is
believed to be a stray that lives near the stadium and can often be seen in
the parking lot; this is the first time he got into the stadium.

People in the neighbourhood regularly put out milk for the cat. One man
said he will now call the cat "Kenny," after the manager of Liverpool's
soccer team, Kenny Dalglish.

Since its appearance, the cat has even had an official Twitter account
set up and has almost 25,000 followers so we have been informed.

Cat Has Fun at Soccer Match in Turkey

Appearing on the soccer pitch in Istanbul, Turkey this cat created quite
a stir.

Ukraine's Shakhtar Donetsk beat German side Werder Bremen 2-1 in a drab
game littered with mistakes report Will and Guy. The highlight was not the
goals but the cat.

During the match the cat decided to befriend the cameramen perhaps
knowing they might make him famous.  The thousands in the crowd took him to their hearts and he received
louder cheers than the home team. (Watch out for fanzine question: 'When did
a cat last beat a turkey?')

No wonder they say never work with children or
animals.  Here are more tales of various beasts entering the world of
football. 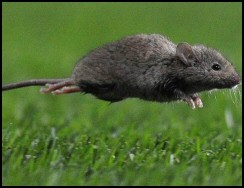 Will and Guy can confirm that there was a mouse on the pitch at Old
Trafford, the home of Manchester United Football Club, England's Premier
League Champions, one night recently.

This cheeky little feller above had his photo taken during United's
victory over West Ham United.

We're not sure if he had any influence over the result.

After the cat and mouse football stories, I expect your thinking Tom and
Gerry are next?  But no, it's an elephant!

Stray horses were churning up a football pitch and disturbing dog walkers
near a nature reserve. Four horses were wandering over a playing field off
Dawlish Road in Dudley, West Midland, England.

People walking their dogs at the site, a short distance from *Wrens Nest
Nature Reserve, said the animals had been in the area for the past two
weeks.

Since the beginning of January, Will and Guy have learned horses have
been running riot across housing estates, stomping over gardens and running
out in front of cars.

Apparently more than 400 reports of horses being sighted in the area and
have been logged by council officials.

Players interviewed by Will and Guy have been concerned that match
grounds have become less safe and not very salubrious since the horsey
invasion. 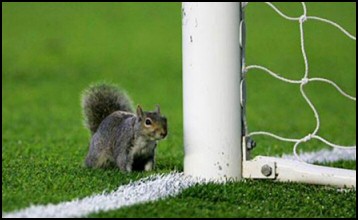 Photographed by Tom Hevezi we can show you the squirrel that stopped the
match at Highbury Stadium, the former home of Arsenal FC in London, England
in 2006. We were told that during Arsenal's European encounter with
Villareal in 2006, the crowd quickly turned their attention from the players
to the American grey.  'We were chanting Squirrel! Squirrel!' comedian
and lifelong Arsenal fan Paul Kaye told reporters, 'Kind of an odd memory to
have from a Champions League semi-final.'

Will and Guy have to agree.

Footnote:
Please send us your funny football and dog
stories.