Caller: Hi, hum, we've found an elephant walking down the street near the
community center.

1) Elephant escapes onto the street

2) Police Dispatch:
We have a report of an elephant currently walking down Eagle Street

We suggest that to see precisely what happens you watch the elephant
escape video below.

More Elephants on the Rampage

The Sri Lankan Daily News has informed Will and Guy that a herd of wild
elephants blocked the access road for voters heading to vote in polling booths
in Wellaveli, eastern Sri Lanka.

Security forces had to employ megaphones to drive away the wild elephants.
What happened was villagers in Wellaveli complained that they were could not
reach the polling station to vote. The police and army were able to draw away
the herd of elephants.  The roads are now clear and the villagers can
exercise their vote. 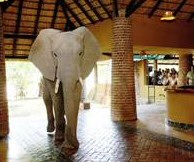 It is not every day that guests in a hotel would expect to share the
foyer with an elephant, or even a herd of elephants.  However, Will and
Guy have learned that in the Mfuwe Lodge in Zambia, it is a common occurrence. The herd,
numbering ten, is led to the lodge each day by the matriarch, Wonky
Tusk.

The hotel was unwittingly built on the route to the herd's favourite
mango trees and the elephants have seen no reason to change the path
trodden by generations before them.

Andy Hogg, 44, director at Mfuwe Lodge, said the herd appears every
November as the mangoes ripen, 'This is a totally natural phenomenon,
the elephants come here of their own accord and it is certainly a rare
but magnificent sight.'