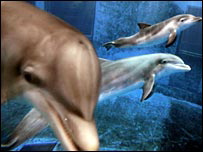 Dolphins are increasingly being used in therapeutic treatments Swimming with dolphins appears to help alleviate mild to moderate depression, researchers have
found. A University of Leicester team tested the effect of regular
swimming sessions with dolphins on 15 depressed people in a study carried out in Honduras.

They found that symptoms improved more
among this group than among another 15 who swam in the same area - but did not interact with dolphins.

The study of the above dolphin therapy is published in the British Medical Journal. 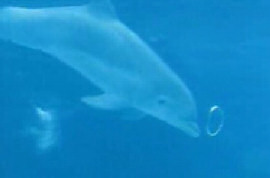 A game that these dolphins like to play is 'bubble ring'.
What they do (you could imitate underwater) is purse their lips.  Pretend that you
are about to kiss your beloved.  Start blowing out through your mouth.
This is the crucial part.  The next sequence is the knack of blowing a
bubble ring.

Quickly open and close your lips so they push out a small bubble of air.
The key is break-off abruptly. The air should rush out.  Don't worry if
you don't create a perfect ring at first.  Keep practising and you will
get a bubble ring, just like the dolphins. 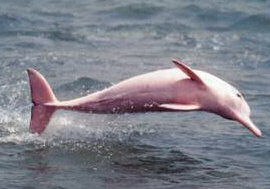 The pink
river dolphin lives in the Amazon rainforest. They are usually born grey and become pinker with age: they are found in the tributaries and main rivers of the Orinoco River systems in
South America. This animal can stay submerged for up to fifteen minutes; males sleep just below the surface and they come up to breathe. The pink dolphin's body has adapted to the rivers of the Amazon. 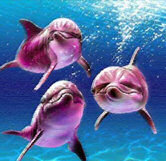 These Amazon river dolphins are also known as 'botos'.  However, there are also relatives in the Chinese Yangtze river, where they are called baiiji.  Unfortunately, both species are endangered due
to thoughtless hunters.

Pink pacific humpback dolphins [known as white dolphins] are also found in small
populations off the coast of China, Singapore, Thailand and Vietnam. Hong Kong dolphin watch has been working since 1995 to increase the public's awareness of these dolphins plight as they are struggling to
survive.

The Pink Dolphin Appeal was launched in April 2003 and collects money for research into breast cancer.

4) I Wish I Could Swim With These Dolphins

Because there is danger that is involved in a dolphin.  Please do not grow a hand in a fence.

5a)
It's unlikely
this dog read the above dolphin sign

6) Dolphins Go on a Diet Learn Will and
Guy

Performing dolphins at Kinosaki Marine World in western Japan, have been
placed on a special low-fat diet after developing fat stomachs which have
seriously affected their abilities to look sharp in their aquatic
performances. All 19 dolphins have been on the diet for two months, after
they had they started failing to hit jumping targets and keep upright while
treading water.

'We were puzzled by their poor performance, then we noticed they looked
rounder,' reported park spokesman Haruo Imazu.  Keepers measured their
weight and found all had become tubbier, some were 22 pounds heavier just
during the summer. All had the same menu: about 31 pounds of mackerel mixed
with some white fish, but keepers found the mackerel had got fatter as well,
adding far too many calories for the dolphins. Their handlers immediately
put them on a weight-loss programme, we have discovered, feeding them more
white fish and less fatty mackerel, while instituting a routine exercise
regimen.

Eating
Watching dolphins feeding on shoals of fish is fascinating.  The school
of dolphins herd the fish into a ball, then each dolphin in the school takes
it in turn to swim through the fish and seize a tasty snack.  Such is
the control of the dolphins, that it is impossible for the fish to escape
until all the dolphins have had their fill.

Drinking
How dolphins drink water is a conundrum.  In a nutshell, they don't
drink seawater, because of the salt concentration.  Thus they have to
obtain water through their food, for example, squid or sea cucumber.
The rest of their water balance is down to having efficient kidneys.
Talking of water balance, let us consider, how do we humans 'lose' water?
The answer is by sweating and through exhaling, both of which are reduced in
the dolphin.

Echo Location
Dolphins see and navigate their underwater world by echo location.  By
generating clicks at about 500 clicks per second, dolphins can echo locate,
their friends, their foes and their prey.  We are only just
appreciating their skill in simultaneously detecting objects, both near and
far, moving and stationary.

Collective Name for Dolphins
Although dolphins are more closely related to dogs than cows, the males are
called bulls, the females cows, and their offspring are calves.  I am
never sure why a group is called a school of dolphins, is it because of their
playfulness, or is it their keenness to learn?

Derivation of the Word Dolphin
If you research the meaning of the English word 'Dolphin', you will find that it leads to the
Latin word delphinus and ultimately to the Greek, delphís.  The
meaning of these words is linked to the Greek for womb, perhaps the ancients
were seeking a name that showed that this animal was a mammal and not a fish.

It is also suggested that dolphin means beak.  Whilst the beak is a key
feature of the dolphin, and is useful in telling the difference between the
various species, I cannot immediately see how Dolphin MEANS beak.  I go
with dolphin meaning 'womb fish'.