A Hungry Dog Goes to
Any Length
for a Snack

What a dog will do to get that extra crumb.

It's a Dog's Life in the
Kitchen 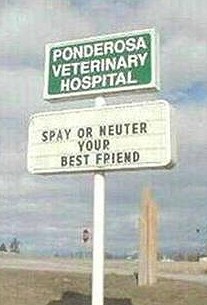 It's a Dog's
Life - Even Stick Insects Beat You Up

Please send us your pictures of a 'Dogs life', or even a Dog's life!

Where Do Dogs Come From?

What Dogs Do When You Get
Them Home

When a Dog's Life is Over

The origin of the catchphrase 'It's a Dog's Life' is obscure.  One of
the earliest popular reference is Charlie Chaplin's 1918 film called 'A Dog's
Life'.  There is also a well known 1955 film by Herman Hoffman, this title
include the It's - 'It's a Dog's Life'.

The phrase is so evocative of the downtrodden hero, that it's perfect for
Charles M. Schulz's Snoopy.  It's a dog's life has also inspired music and
also T.V. episodes of popular programs such as 'Murder She Wrote'.

Is it a Dog's Life Anymore?

There was a time when dogs weren't allowed in the house.  Dogs were fed
scraps and if they were lucky they had a kennels.  Thus a whole family
of sayings arose around 'It's a dogs life'.  For example, going to the
dogs, dog tired,  dog's dinner, dogsbody and dog eat dog.

However, nowadays, dogs have it cushy, they live indoors are pampered with
dog food, and even get their own dog basket.  In consequence the young
generation are perplexed by the saying, 'It's a dogs life'.

A Different Slant - Walking the Dogs

Walking the Dog - In Verse

Here is a verse from the song composed and performed originally by Rufus
Thomas and later made famous by The Rolling Stones in the 1960's.

Puss in Boots? No
Will and Guy Bring You a Dog in Boots 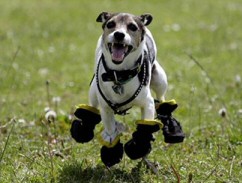 A beloved pet Jack Russell Terrier has to be dressed in specially made
boots for walkies to protect his delicate paws because he is allergic - to
GRASS.

Long-suffering eight-year-old Jaxs suffers a painful reaction if he comes
into contact with even a single blade of grass Will and Guy have recently
learned.

The allergy causes huge clumps of fur to fall out and leaves Jaxs
suffering huge sores on his sensitive paws. But Jaxs' life was transformed
after a local vet suggested his owner Maria Domanic fit him out in 'doggy
boots'.

Retired care worker Maria, 59, from Kingsbridge, Devon, England remarked,
'He absolutely loves the boots. Initially he was a little tentative but over
time he's become very protective of them. One day, I took him to the vets
and had him tested, which showed he was allergic to grass, as well as milk,
protein and oats.'

We can share with you that Little Jaxs has become so attached to the
boots, which are made of canvas and attached using Velcro, that he even
picks them up in his mouth before walkies.

Maria added, 'He even sleeps with them in his basket.' Altogether a
heart-warming ending to a doggy tale.

Walking My Baby Back Home

'Walking my baby back home' is a popular song written in 1930 by Roy Turk and
Fred Ahlert.  Later it was a big hit in 1951 sung by the inimitable Nat King
Cole.  This is how it goes....

Footnote:
Please send us your It's a dog's life pictures.