Skip to content
After years of being in the dog-house, dogs are now fighting back.  Will and Guy bring you evidence of the how dogs fight back.

Dog Gets Revenge on Cat 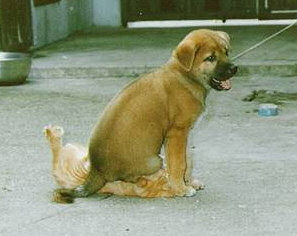 A dog owner is having to chain up his pet to stop him hopping on to the bus and going to the pub. Gary Kay's terrier Ratty regularly got on the bus on his own to go to the Black Bull pub, in Hull Road, York.  Ratty made the trip to the pub, where he was fed sausages by a barmaid, twice a week, reports the York Post.  His outings came to an end when the pub went upmarket and banned animals from the premises.  But now Gary, from Dunnington, York, says Ratty has found a new local - the Rose And Crown Pub, in Lawrence Street.  He believes Ratty has been getting off the bus at the Black Bull on his own, crossing the road and turning up at the Rose and Crown. 'I've had to start chaining him up because, although he can get to the pub on his own he can't get home,' said Gary. [Not an uncommon occurrence say Will and Guy] 'I've no idea how he is doing any of this or how he crosses the road. This dog just has a mind of his own.' 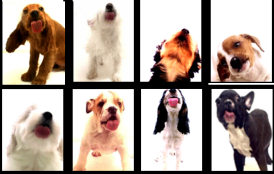