Will and Guy Take A Look At Diwali Humour

Diwali, this Hindu festival of lights is
held 15 days from the
full moon of Kartik.  Here is a selection of jokes and funny pictures
to celebrate the festival.

Madhul was flying home to see her
family to celebrate Diwali with them. Fifteen minutes into the flight from
Bombay to Delhi, the captain announced, 'Ladies and gentlemen, one of our
engines has failed. There is nothing to worry about. Our flight will take an
hour longer than scheduled, but we still have three engines left.'

Thirty minutes later the captain announced, 'One more engine has failed
and the flight will take an additional two hours. But don't worry . . . we
can fly just fine on two engines.'

An hour later the captain announced, 'One more engine has failed and our
arrival will be delayed another hour. But don't worry... we still have one
engine left.'

Madhul, turned to the man in the next seat and sighed and she said, 'If
we lose one more engine, we'll be up here all day.'

Gajendra 'phones Air India, 'How long
does it take to fly to Amritsar?'

'Just a sec,' answers the rep.

'Thank you,' says Gajendra and hangs up.

On the eve of Diwali a blackjack
dealer and Damodar, a player who is holding cards adding to 13 were arguing
about whether or not it was appropriate to tip the dealer.

Damodar said, 'When I get bad cards, it's not the dealer's fault.
Accordingly, when I get good cards, the dealer obviously had nothing to do
with it so, why should I tip him?'

The dealer argued, 'When you eat out do you tip the waiter?'

''Well then, he serves you food, I'm serving you cards so you should tip
me.'

'OK, but, the waiter always gives me what I ask for.  Give me an eight
to make blackjack,'
concluded Damodar.

Dear sir, with reference to your above, see my below - popular opening
line in official letters.

Popular Diwali Stories for this Special Festival of Lights

1) The Killing of the Demon Narakaasura

The demon Narakaasura was the evil king of Pragjyotishpur, near Nepal. He
ruled with a reign of terror, abducted 16,000 daughters of the gods and
stole the earrings of Aditi, mother of the gods.

The gods asked Lord
Krishna for help and, after a mighty battle, he killed the demon, freed the
girls and recovered the earrings.

After his victory Krishna returned very early in the morning and was
bathed and massaged with scented oils.

2) The Killing of the Demon Ravana

Ravana, who had ten arms and ten heads, was the wicked king of the island
of Sri Lanka, who kidnapped the wife of Rama. Rama had been in exile for 14
years because of a disagreement as to whether he or his brother should be
the next king in Ayodhya.

After a great battle Rama killed the demon and
recovered his wife. Rama's return with his wife Sita to Ayodhya and his
subsequent coronation as king is celebrated at Diwali.

When Rama and Sita
first returned to Ayodhya it was a dark moonless night and they couldn't see
where they were going. Their people put little lamps outside their houses so
that the new king and queen could find their way.

A particularly lovely story which Will and Guy have learned about, is
about the sixteen year old son of King Hima. According to astrology he was
doomed to die by a snake-bite on the fourth day of his marriage.

On that particular fourth day of his marriage his young wife did not
allow him to sleep. She laid all the ornaments and lots of gold and silver
coins in a big heap at the entrance of her husband's bedroom and lit
innumerable lamps all over the place. She proceeded to tell stories and sing
songs, determined to do so all through the night.

When Yam, the god of Death arrived there in the guise of a serpent his
eyes got blinded by that dazzle of those brilliant lights and he could not
enter the Prince's chamber. So he climbed on top of the heap of the
ornaments and coins and sat there whole night listening to the beautiful and
melodious songs. In the morning he quietly went away.

Thus the young wife saved her husband from the clutches of death. Since
then this day of Dhanteras came to be known as the day of "Yamadeepdaan" and
lamps are kept burning throughout the night in reverential adoration to Yam,
the god of Death.

4) The Legend of King Bali

Another enjoyable legend is that of King Bali of the underworld; his
mighty power had become a threat to the gods who were gravely concerned.

In order to curb his powers Lord Vishnu in the guise of a "Batu Waman", a
small boy, visited him and begged him to give him only that much land which
he could cover with his three steps.

Known for his philanthropy, King Bali proudly granted him his wish. That
very moment that small boy transformed himself into the all-powerful Lord
Vishnu.

With his first step Lord Vishnu covered the entire heaven and with the
second step the earth and asked Bali where to keep his third step. Bali
offered his head. Putting his foot on his head Vishnu pushed him down to the
underworld.

At the same time for his generosity, Lord Vishnu gave him the lamp of
knowledge and allowed him to return to earth once a year to light millions
of lamps to dispel darkness and ignorance and spread the radiance of love
and wisdom. 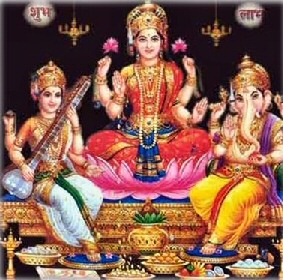 The festival celebrates the victory of good over evil, light over
darkness and knowledge over ignorance, although the actual legends that go
with the festival are different in different parts of India. 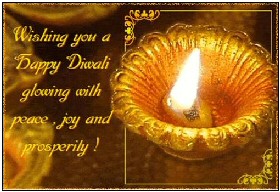