This page is a mini sitemap for stories that tickle our sense of humour.  We selected each story because it made us laugh, some stories are true, while others are invented, it's fun sifting myth from reality.

A man who had spent 20 years in prison for bank robbery back in 1963 thought he would try again in 2003 in Spotsylvania County, Virginia, USA.  He demanded and received several thousand dollars from two surprised bank cashiers and as he fled he spilled $100 notes in his wake as he attempted to stuff the cash into his pockets and get away. When he reached his hired getaway car he realised that he had locked his keys inside. This bungling burglar promptly took to his heels and fled the scene on foot followed by two passersby who grabbed him. The fleeing felon attempted to pull out his gun but failed, and shot himself in his leg but kept fighting his would be arresters; one of whom shot the suspect. The local police have charged the robber with 8 felonies, including robbery and 2 counts of attempted murder. The suspect was attended to in hospital and recovered. 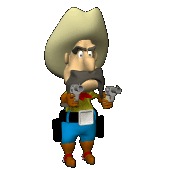 [Open letter from Ms Peggy Legg] This is an explanation to those friends and family who have experienced mysterious switches of their body parts.  This effect is especially noticeable in January. You may have read of the scare story about the man whose kidneys were stolen while he was passed out. Well, read on. While the kidney story was an urban myth, my story is true - it occurs to me practically every day.

My thighs were stolen from me during the night a few years ago.  It was just that quick. I went to sleep in my body and woke up with someone else's thighs. The new ones had the texture of cooked oatmeal. Who would have done such a cruel thing to legs that had been mine for years? Whose thighs were these and what happened to mine? I spent the entire summer looking for my thighs. Finally, hurt and angry, I resigned myself to living out my life in jeans and Sheer Energy pantyhose.

Then, just when my guard was down, the thieves struck again. My butt was next. I know it was the same gang, because they took pains to match my new rear end (although badly attached at least three inches lower than my original) to the thighs they stuck me with earlier. Now, my rear end complimented my legs, lump for lump. Frantic, I prayed that long skirts would stay in fashion. It was two years ago when I realized my arms had been switched. One morning I was fixing my hair and I watched horrified but fascinated as the flesh of my upper arms swung to and fro with the motion of the hairbrush. This was really getting scary. My body was being replaced one section at a time. How clever and fiendish. Age? Age had nothing to do with it. Age is supposed to reap, unnoticed, something like maturity. NO, I was being attacked repeatedly and without warning. In despair I gave up my T-shirts. What could they do to me next? My poor neck disappeared more quickly than the Thanksgiving turkey it now resembled. That's why I decided to tell my story. I can't take on the medical profession by myself.

Women of the world, wake up and smell the coffee. That really isn't plastic that those surgeons are using. You KNOW where they are getting those replacement part, don't you? The next time you suspect someone has had a face ' lifted', look again. Was it lifted from you? I think I finally found my thighs...and I hope Cindy Crawford paid a really good price for them! This is not a hoax. This is happening to women in every town every night. WARN YOUR FRIENDS. Yours alarmed Peggy Legg

Many of these stories are suitable for after-dinner speeches.  I also think that story of 'The Gassed Budgie' or 'Uncle Jack's Suit' could be the basis of a plot in a sketch, T.V. program or even a short film.

Dancing in the Rain: An Inspirational Tale

It was a normal, busy morning, about 8:30 when, George, an elderly gentleman, well into his 80's, arrived at Queen Alexandra Hospital, Cosham, England, to have stitches removed from his thumb. George told me that he was in a hurry as he had an appointment at 9:15 am. I weighed him and took his blood pressure and invited him take a seat in the waiting area, knowing it would be over an hour before someone would be able to see him. I saw him looking at his watch and decided, since I was not busy with another patient, I would evaluate his wound. On examination, it was well healed, so I talked to one of the Doctors, got the needed supplies to remove his sutures and redress his wound. While taking care of his wound, I asked George if he had another doctor's appointment this morning, as he was in such a hurry. George told me no, but that he needed to go to St Christopher's Nursing Home to eat breakfast with his wife. I inquired as to her health. He told me that she had been there for a while and that she suffered from Alzheimer's disease. As we talked, I asked if she would be upset if he was a little late. George replied that she no longer knew who he was and that she had not recognized him in five years. I was surprised, and asked him, 'And you still go every morning, even though she doesn't know who you are?' He smiled as he patted my hand and said, 'She doesn't know me, but I still know who she is.' I had to hold back tears as George left, I had goose bumps on my arm, and thought, 'That is the kind of love I want in my life.' True love is neither physical, nor romantic. True love is an acceptance of all that is, has been, will be, And will not be. With all the jokes and fun that is in e-mails and web sites sometimes there is one that comes along that has an important message. This one Will and Guy thought we could share with you.

'Life isn't about how to survive the storm but how to Dance in the Rain.'

Here is the situation, Jenny the farmer's wife looks out of her window.  What does she see but a bull in a field caught his head in between the bars of a feeder. Jenny calls the fire brigade. Their siren only makes the bull more agitated.  When they appraise the situation they realise they are not equipped to deal with cattle, so they phone for the RSPCA inspector to help free the animal. Six hefty firemen and the inspector push and pull the beast and eventually they wrestle its head from between the bars.

The bull was, by now, very angry and turned snorting at the men and began to attack them. Fearing for their life, they hide in the animal feeder. Whereupon the farmer's wife burst into tears of joy followed by tears of laughter. Jenny was now able to rescue the rescuers. All she did was get the bull's old milk bottle, half fill it with milk, put on the teat, and use it to lead the bull from the animal feeder into the farmyard and close the gate.

When visiting my wife's home country of England on our honeymoon, we arrived at London's Heathrow Airport. Geraldine headed for the British passport entry queue while I, an Australian, waited in the ' foreigners' queue. When my turn came, the Immigration official asked me the purpose of my visit.' Pleasure, 'I replied.' I'm on my honeymoon.' The officer looked first to one side of me, then the other.' That's very interesting, sir, 'he said as he stamped my passport.'  Most men bring their wives with them.'

Roger Letzer was visiting the cemetery near Portchester Castle in England and he couldn't help noticing a man kneeling in front of a gravestone, clasping his hands and sobbing. Roger went a bit closer and could hear what the man was saying. 'Why did you have to die?' he was repeating, 'Why did you have to die?' Feeling he ought to do something to alleviate the man's obvious distress Roger laid his hand on the his shoulder saying gently, 'Was it someone you loved very much?' The man looked up at him and said, 'No, I never met him, he was my wife's first husband.'

Old Age, I Decided, Is a Gift!

I am now, probably for the first time in my life, the person I have always wanted to be. Oh, not my body! I sometime despair over my body - the wrinkles, the baggy eyes, and the sagging butt. And often I am taken aback by that old person that lives in my mirror, but I don't agonize over those things for long. I would never trade my amazing friends, my wonderful life, my loving family for less gray hair or a flatter belly. As I've aged, I've become more kind to myself, and less critical of myself. I've become my own friend. I don't chide myself for eating that extra cookie, or for not making my bed, or for buying that silly cement gecko that I didn't need, but looks so avant-garde on my patio. I am entitled to overeat, to be messy, to be extravagant. I have seen too many dear friends leave this world too soon; before they understood the great freedom that comes with aging. Continues here..... Footnote: Please send us your funny short story.