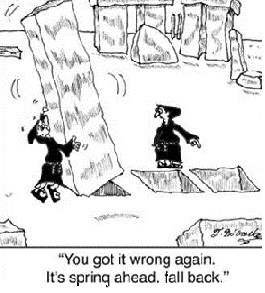 DST this is what America and much of the rest of the world calls 'Summer
Time'.  It's interesting that the USA uses the abbreviation DST,
whereas the United Kingdom employs the full phrase 'Summer Time'.

DST starts on the second Sunday in March (not the last), and end
ends on the first Sunday in November, (not the last Sunday in October).
Another difference is that DST lasts for three weeks longer than Summer
Time.

The clocks are getting hungry!  They go back four seconds!

It's always the last Sunday in October when Summer Time ends, and the clocks
fall back.  The precise time on that Sunday morning is 2:00 am BST,
which becomes 1:00 am GMT.

The key of remembering what happens to the clock is: 'Spring forward and
Fall back'.

On the last Sunday of March the clocks spring forward, 1:00 am GMT
becomes 2:00 BST.

The Origin of British Summer Time

In many way the trains started it!  Once railways became popular
problems arose with timetabling long journeys that moved through time zones.
Thus there was a need for a standard time, this became London time and then
Greenwich Mean Time (GMT).  Summer Time came in to being in 1916, the
idea was to make better use of daylight in the munitions factories.  My
point is that without the standardisation provided by GMT there could have
been no Summer Time.

Since 1916 there have been a number of attempts to tinker with the idea
of the clocks springing forward an hour in March and falling back at the end
of October; most notably double summer time in the 1940s.  Indeed in
the Autumn of 2010 there has been a serious move to re-introduce lighter
evenings in effort to save power and reduce road accidents.

Which confectionery is never on time?
Choco-late!

Why did Mickey Mouse sit on his watch?
He wanted to be on
time!

Donald Duck set's his alarm clock at what time?
The quack of
dawn.

Why was grandfather's clock sent to asylum?
Every hour it
went: 'cuckoo'.

Why did the lunatic throw grandfather's clock out of the window?
He wanted to see time fly.

A dog owner who lost a £500 watch found it when he heard the alarm going
off in his pet’s stomach. Terry Morgan took the Newfoundland to the vet and
was facing a £1,000 bill for an operation when the dog, Charlie, saved him
the cost in the nick of time. Mr Morgan, 66, from Cockwood, Devon, said:
"When Charlie saw the anaesthetic needle he howled with fright and coughed
the watch up."