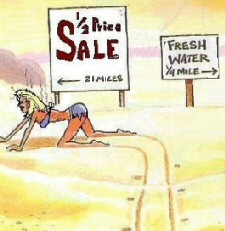 Following Thanksgiving Thursday comes 'Black
Friday'.
Since 2005 the following Monday has been labelled 'Cyber Monday' and has become one of the
busiest shopping days of the year.

Funny Story At the Shopping
Mall

This is how to find your wife, even in the busiest shopping mall.  Follow these
four point
instructions, the technique never fails.

Another Tale from the Shopping
Mall

Mason watched as a woman at the shopping mall shopped with a four-year-old girl.  As they approached the sweet section the little girl
asked for some liquorice sticks and her mother told her, 'No'. The little girl immediately began to whine and fuss.  The mother said softly, 'Now Cindy, our shopping is going well, Don't

Presently, they came to the aisle where the ice cream was on offer and the little girl began to ask for an ice lolly.  When told she couldn't
have one she began to
cry.  The mother said gently, 'There, there, Cindy, don't
cry. Only two more aisles to go and then we'll be at the check out'
.

When they got to the conveyer belt the little girl immediately began to
demand sweets next to the checkout.  Finally she threw a tantrum when her mother would not let her have any sweets.  The mother, calmed her saying, 'Cindy, we'll be through this queue in two minutes and
then we can go home and have a glass of squash and a nap.'

Mason followed them out to the car park and stopped the woman to compliment her on her child management.

'I couldn't
help
admiring how patient you were with little Cindy,' Mason said.

The mother turned and replied, 'Oh, no, I'm Cindy. My little girl's
name is Dorothy.

Freya was driving home on Cyber Monday when she saw an elderly Apache woman walking along the side of the road
outside Albuquerque, New Mexico.  She stopped the car and asked the woman if she would like a lift?

With a
silent nod, the woman climbed into the car.  Freya tried in vain to make conversation with the Apache woman.

'It's
a bottle of gin that I got for my husband.'

What Is Cyber Monday Shopping 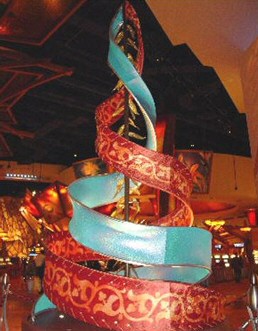 The phrase 'Cyber Monday' was invented by marketing gurus for the Monday
immediately following Black Friday.  The
term made its debut on November 28, 2005 in a Shop.org press release
entitled "'Cyber Monday' Quickly Becoming One of the Biggest Online Shopping
Days of the Year".

Coincident with the advent of internet shopping, 'Cyber Monday' has
gained a worldwide reputation for a spending bonanza and the time for stores
to finalize their Christmas displays.

Try Before You Buy!

Myra was going to the Christmas office party but needed a new dress. In the store she asked, 'May I try on that dress in the window,
please?'

'Certainly not, madam,' responded the salesgirl, 'You'll have to use the
fitting room like everyone else.'

Picture this, it was just after Thanksgiving, and the judge was in a
happy mood. He asked the prisoner who was in the dock, 'What are you charged
with?'

'That's no crime', said the judge. 'Just how early were you doing this
shopping?'

Another related legend believed by many fishermen is:
'A Friday's sail,
always fail.'

A man from Little Rock, Arkansas was
awarded $14,500  and medical expenses after being bitten on the buttocks by his next door neighbour's
beagle.  The beagle was on a chain in its owner's
fenced-in yard, as was the man.  The award was less
than sought because the jury felt that the man who, at the time, was shooting the animal repeatedly with a pellet gun might have provoked the dog.