Will and Guy's collection of funny, silly and surprising jokes in
honour of the humble potato.

Will has just come across this exercise,
suggested for 'seniors', to build muscle strength in the arms and shoulders.  It seems so easy, so I thought I'd pass it on to some of my friends and family. The article suggested doing it three days a week.

Begin by standing on a comfortable surface where you have plenty of room at each side. With a 5lb potato sack in each hand, extend your arms straight out from your sides and hold them there as long as you
can. Try to reach a full minute, then relax.

Each day, you'll find that you can hold this position for just a bit longer. After a couple of weeks, move up to 10lb potato sacks.

Then 50lb potato sacks and
then eventually try to get to where you can lift a 100lb potato sack in each hand and hold your arms straight for more than a full minute.

After
you feel confident at that level, put a potato in each of the sacks.

Job for a Potato?

A fortnight later the Peter calls back and lo and behold the clock is ready. Delighted with the result, he pays the watchmaker and starts to leave the shop, when the Iain says, 'Errr,
excuse me for asking, but this was a most unusual request; may I enquire why you want a clock made out of potatoes?'

'Certainly,' replies Peter, 'Just before I saw you last, I went for a job interview
and we discussed my skills and experience. The interview went pretty well and the man said I could have the job providing I could get a potato clock.'

Some people never seem motivated to participate, but are just content to
watch while others do the work.
They are called 'Spec Taters'.

Some people never do anything to help, but are gifted at finding fault with
the way others do the work.
They are called 'Comment Taters'.

Some people are very bossy and like to tell others what to do, but don't want
to soil their own hands.
They are called 'Dick Taters'.

Some people are always looking to cause problems by asking others to agree
with them. It is too hot or too cold, too sour or too sweet. They are called,
not Silly Billies but
'Aggie Taters'.

There are those who say they will help, but somehow just never get around to
actually doing the promised help.
They are called 'Hezzie Taters'.

Some people can put up a front and pretend to be someone they are not.
They are called 'Immy Taters'.

Then there are those who love others and do what they say they will. They are
always prepared to stop whatever they are doing and lend a helping hand. They
bring real sunshine into the lives of others.
They are called 'Sweet Po Taters'.

If you know any 'Sweet Po Taters', send this to them!! I just did

While
I was watching the back-to-back football games the other night, my wife and I
got into a silly conversation about life and death, and the need for living wills.
During the course of the conversation I told her that I never wanted to exist in
a vegetative state, dependent on some machine and taking fluids from a bottle.  She got up, unplugged the TV and threw out all my beer.

However, We Do Have a Fit Bird 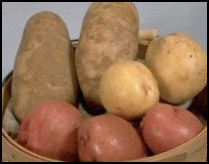 Small and pink, black and bumpy,
even grey and shrivelled -- the potato took centre stage on Tuesday as Bolivian peasants admired each other's
prize produce at an Andean harvest festival.

Hundreds of villagers dressed in traditional
ceremonial dress of bright red ponchos and shawls gathered in the highland village of Pillapi to show off 32 varieties of potato, swap tips, dance and share a typical potato picnic. 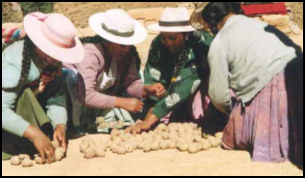 Lino Condori, mayor of
the Tiwanaku municipality where Pillapi is located, said 'the potato that the conquerors took to Europe is the most important product in our region' .

He was referring to Spain, which colonised the Andean
highlands in the 16th century and took one of their discoveries -- potatoes -- back to Europe.

Local authorities are hoping the festival will eventually become a tourist attraction.  Reported from
PILLAPI, in Bolivia by Reuters.

Give Peas a
Chance

A Cheltenham mum is to undergo therapy to help her overcome her fear of peas.  Louise Arnold flees restaurants if she spots peas on a plate and gets anxious if she sees them in a
supermarket. Now Louise, 35, is to undergo therapy as part of an ITV show called Phobias in a bid to cure her irrational fear. She will see counsellors, hypnotherapists and acupuncturists to tackle the phobia
which began after the birth of daughter Chloe, five.

She said: 'I've got to stop this because I can't
bear to be in the same room as peas. There have been occasions where I've been out for a meal and asked
the waiter for no peas and had to rush out of the restaurant when they forget. I can't
even go to my local pub because they serve peas on the menu. I'd love to lead a normal life and be able to go into the pub
and have a drink.'

But she gets little sympathy from her friends, who bought her a silly T-shirt saying: 'Give peas a chance'.

Nicky Lidbetter of the National Phobic Society believes that Louise could be cured
of her phobia.

Checking the menu, Barry, a restaurant customer, ordered a bowl of soup. After a couple of spoonfuls, he saw a circle of wetness right under the bowl on the tablecloth. He called the waitress over and said,
'It's all wet down here. The bowl must be cracked.'

The waitress said, 'You ordered vegetable soup, didn't you?'

'Well, maybe it has a leek in it!', interjected the
waitress.