Here is our cookery section.  Preparing food is a rich source of funny outcomes,
because there are many possibilities for humorous slips between cup and lip.

Nigel: The two things I cook best are meatloaf and apple pie.
Sally: Which is this?

How to Cook - or Not

Michael has no talent for cooking.  He has trouble with such simple tasks as peeling potatoes or slicing onions, even though he often insists on helping his wife in the kitchen.  Once he read a shopping list on
which Greta had written, 'unhusked rice.'  Good lord, 'he sighed, 'what a job that's going to be'.

How Bachelors Cook - or Not

Two confirmed bachelors sat talking. Their conversation drifted from
politics to cooking. 'I got a cook book once', said the first, 'but I
could never do anything with it.'

'Too much fancy cooking in it, eh?' asked the second. 'You said it.
Every one of the recipes began the same way - 'Take a clean dish and...'

Footnote
Have you noticed with jokes, how one story reminds you of another.  This effect is even more noticeable if you tell jokes in pubs.  Well, the above joke reminded Will of
the following true
story.  Names have been changed to protect the guilty.

Nigel retired before Sally, and as a result he would do more of the chores. For example on Friday he would dust and vacuum the house. On two other days he would prepare and cook the evening meal.

Now Nigel's
forté was certainly not cooking. One recipe asked for 'seasoned flour' to be added. Nigel searched the kitchen cupboards and found the plain flour and the self-raising flour.  In the end he had to ring Sally at
her work to ask where she kept the 'seasoned flour'.

At the age of eleven, that's many years ago, I was enrolled in Callington Grammar school, in darkest Cornwall. I have to say it was a perfectly fine school with dedicated if somewhat eccentric teachers and a
generally enlightened outlook.

It did however stick to many of the traditions of the day. Sports and metal work teachers tended to have a military background and short manly nicknames that they fondly
thought the pupils wished to call them. Skip, Gunner and Pip are three that come to mind. They also included in their lessons a ritual humiliation and jovial sadism that was no doubt was supposed to be good for
our character but was something I could never see much fun in. The result was that I, which was a first for a male student, opted to take lessons in domestic science rather than metalwork or woodwork.

Domestic science had nothing scientific about it but the class was all girls, apart from my friend Cobb and I, which was just fine by me.

Our first lesson was hardly challenging. The menu was beans on
toast and cocoa. Each pair of aspirant cooks had a work surface, sink and gas stove. After successfully getting the beans out of the can and into a pan, the milk into another pan and the already sliced bread
under the grill I couldn't help thinking this was all just too easy, and in the same way that the first officer on the Titanic might have nonchalantly called for some ice, I asked Cobb to look for some plates
for our meal.

As he crouched down to look in the cupboards next to the stove a number of things started to happen in quick succession. First, realising that the beans were, to put it mildly, over cooked, I
tried to scrape them off the bottom of the pan, not noticing that the milk was on the point of boiling over and that the already smoking toast had burst into flames.

Luckily, or perhaps not, our teacher had
spotted the situation and strode purposely over to take control of the situation. What she could not have realised was that one of us (we both later blamed the other) had managed to switch on the gas oven
without lighting it. The pressure of the gas slightly pushing open the oven door.

It might have been the lit rings on the top or a piece of falling, incandescent toast but the oven chose that moment to
explode setting light to Miss Pendragon's light blue and white check house coat, which went up in a sheet of flame leaving molten plastic stuck to her clothes, arms and legs. The force of the blast also
knocked the cupboard off hitting Cobb's head momentarily stunning him so he was in no condition to avoid the boiling milk that now jumped off the stove.  It did spring him back into consciousness quite
quickly though!

With what I still believe to be great presence of mind I doused both thoroughly with a bucket of water that had previously been used for cleaning the floor but I am saddened to say was never
thanked by either of them. 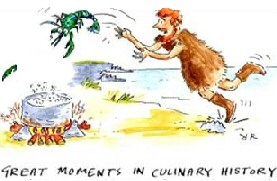 Bring Me The Winner

Waiter, this lobster has only one claw.

I'm sorry, sir. It must have
been in a fight.

Well then bring me the winner.

One day, young Sarah
girl was watching her mother make a roast sirloin of beef. She cut off the ends, wrapped it in string, seasoned it and set it in the roasting dish.

Sarah politely asked her mum why she cut off the ends of
the roast. Mum replied, after some thought, that it was the way that her mother had done it.

That night grandma came to dinner and Sarah and her mother asked why she had cut the end off of the roast before
cooking.  After some thought grandma replied, she cooked the meat the way her mother had done it.

Now great-grandma was quite old and lived in a residential nursing home, so Sarah, her mum and grandma went to visit her
and again asked the very same question.

Great-grandma looked at them a bit surprised and said, 'So it would fit in the roasting dish, of course.'

Microwave - As
Recommended by 'Dr Who'

So clever it can stop time. Guy thinks this is so that you can go back and add more spices.

A Humorous and Appealing Food
Story

The Poor Man and Truffles Restaurant

Old Samuel was a very poor tailor whose shop, in Redbridge, Essex,
England, was next door to a very upmarket French restaurant - Truffles. 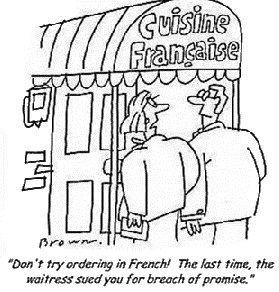 Every day at lunch time, Samuel would go out the back of his shop and eat
his black bread and herring while smelling the wonderful odours coming from
the Truffles' kitchen.

One day, Samuel was surprised to receive an invoice from Jean-Luc, the
restaurateur for "enjoyment of food." So he went Immediately to speak to
Jean-Luc to point out that he had not bought anything from them. Jean-Luc
smiled and said, 'You're enjoying our food, so you should pay us for it.'

Naturally Samuel refused to pay and the restaurant owner sued him.

At the hearing, the Judge asked the restaurant to present their side of
the case. Jean-Luc stood up and purred, 'Every day, this man comes and sits
outside our kitchen at the rear of Truffles; he smells our food while eating
his, it is clear that we are providing added value to his poor food and we
deserve to be compensated for it.'

The Judge turns to Samuel and said, 'What do you have to say to that?'

Samuel didn't say anything but stuck his hand in his pocket and rattled
the few coins he had inside.

The Judge asked him, 'What is the meaning of that?'

Samuel replied, 'Well it's simple really, I'm paying for the smell of his
food with the sound of my money.'

Lyn belongs to our Diet Club and she was lamenting that she had
gained weight.

She told us that she had made her family's favourite luscious cake
over the weekend, and added that they'd eaten half of it at dinner that
evening.

The next day, Lyn continued, she kept staring at the other half,
until finally she cut a thin slice for herself. One slice led to another,
and soon the whole cake had vanished.

Lyn smiled broadly and quipped, 'He never found out.  I made another
cake and ate half of that too.'

The Doubly Strange Saga of the Chanterelle Lemon Soufflé

According to Reuters, Canada's Ottawa Citizen newspaper in the Autumn of 2006 printed a recipe for Chanterelle Lemon Pasta in its food section. Ingredients included one cup of Chanterelle mushrooms. They even
provided a helpful photograph so amateur mushroom hunters could find their own growing in the wild. Unfortunately, the photograph instead showed Destroying Angels mushrooms, which are deadly when eaten.

Why is this a doubly story strange?  Well the Chanterelle Lemon Soufflé saga has all the makings of an urban myth.  Will and Guy could not find the alleged original article either on Reuter's site, or
amongst the Ottawa Citizens articles.  We have culled the pictures below from elsewhere, simply to illustrate the two species of the fungi in question. 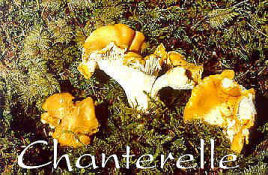 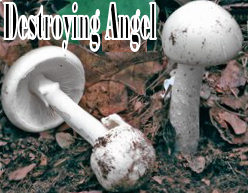 Meanwhile, while we await Canadian readers to write-in with the inside story, we wish to emphasise that Destroying Angel, Amanita Virosa, and the closely related Amanita Phalloides are deadly poisonous.
The main difference from the ordinary mushroom is that these Avenging Angel caps are pure white, or occasionally have a green aura.  The gills under Destroying Angel cap are also white and are never the usual salmon pink
colour.

Footnote:
Please send us your funny cooking jokes and stories.