Here is a Selection of Our Funny Computer Jokes

George landed his first computer programming position and he was thrilled. His father, Colin, although a stranger to the field, shared George's enthusiasm and welcomed him at the door when he arrived home after his first day, inquiring, 'What did you do at work today?' He listened intently while George explained in great detail his eight hours of COBOL, binary code and JCL errors. When George arrived home the following night, once again his father, Colin, was waiting at the front door.' So, 'he greeted George, 'what did you have for lunch today?'

Signs You've had TOO MUCH Computing

You try to enter your password on the microwave. Old programmers never die. They just terminate and stay resident. 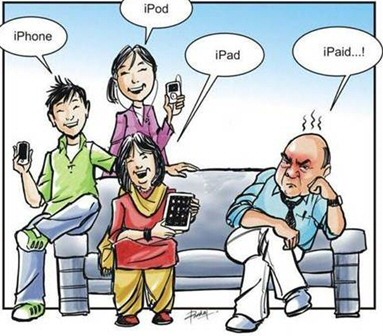 1) Tech support: Are you sure you used the right password? Customer: Yes, I'm sure. I saw my colleague do it. Tech support: Can you tell me what the password was? Customer: Five stars.  Customer: I have a huge problem. A friend has placed a screen saver on my computer, but every time I move the mouse, it disappears. 2) Tech Support: 'Ok, in the bottom left of the screen, can you see the ' OK' button displayed?' Customer: 'Wow. How can you see my screen from there?' 3) Advisor: You have Spyware on your machine which is causing the problem. Customer: Spyware? Can they see me getting dressed through the monitor?

Birth of the Internet

Will and Guy have been sent this short story by a reader of the site and we would like to share it with you. A Funny Story of How the Internet Began 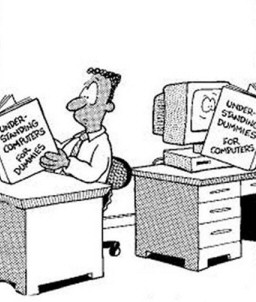 In ancient Israel, it came to pass that a trader by the name of Abraham Com did take unto himself a young wife by the name of Dot. And Dot Com was a comely woman, broad of shoulder and long of leg. Indeed, she was often called Amazon Dot Com. And she said unto Abraham, her husband, "Why dost thou travel so far from town to town with thy goods when thou canst trade without ever leaving thy tent?" And Abraham did look at her - as though she were several saddle bags short of a camel load - but simply said, "How, dear?" And Dot replied, "I will place drums in all the towns and drums in between to send messages saying what you have for sale, and they will reply telling you who hath the best price. The sale can be made on the drums and delivery made by Uriah's Pony Stable (UPS)." Abraham thought long and decided he would let Dot have her way with the drums. The drums rang out and were an immediate success. Abraham sold all the goods he had at the top price, without ever having to move from his tent. To prevent neighbouring countries from overhearing what the drums were saying, Dot devised a system that only she and the drummers knew. It was called Must Send Drum Over Sound (MSDOS), and she also developed a language to transmit ideas and pictures: Hebrew To The People (HTTP). But this success did arouse envy. A man named Maccabia did secrete himself inside Abraham's drum and began to siphon off some of Abraham's business. But he was soon discovered, arrested and prosecuted for insider trading. And the young men did take to Dot Com's trading as doth the greedy horsefly take to camel dung. They were called Nomadic Ecclesiastical Rich Dominican Sybarites, or NERDS. And lo, the land was so feverish with joy at the new riches and the deafening sound of drums that no one noticed that the real riches were going to that enterprising drum dealer, Brother William of Gates, who bought off every drum maker in the land. And he did insist on drums to be made that would work only with Brother Gates' drum heads and drumsticks. Lo, Dot did say, "Oh, Abraham, what we have started is being taken over by others!" And as Abraham looked out over the Bay of Ezekiel, or eBay as it came to be known, he said, "We need a name that reflects what we are." And Dot replied, "Young Ambitious Hebrew Owner Operators." "YAHOO," said Abraham. And because it was Dot's idea, they named it YAHOO Dot Com. Abraham's cousin, Joshua, being the young Gregarious Energetic Educated Kid (GEEK) that he was, soon started using Dot's drums to locate things around the countryside. It soon became known as God's Own Official Guide to Locating Everything (GOOGLE). And that is how it all began. Acknowledgement: Thanks to David Foley for sending us this computer story.

What is the difference between a large pizza and a professional online poker player? The large pizza can feed a family of four

Another Bad Day at the Office 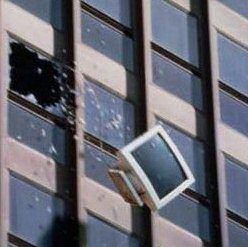 'There is no reason for any individual to have a computer in their home.' Ken Olsen. Head of the Digital Equipment Company now part of Compaq in 1977. (The above is often erroneously attributed to Bill Gates; whereas no one can believe that the quote below would be said by Bill Gates.) 'Your most unhappy customers are your greatest source of learning.'  Bill Gates

What do you get when you cross a computer with an elephant? A 1000 lb know-it-all. Footnote: Please send us your short Computer Jokes