We all do it! Everyone produces grammatical misnakes, its just that
some poof reed better than others. Enjoy our collection of funny grammar
mistakes.

Need: Woman to run up curtains. 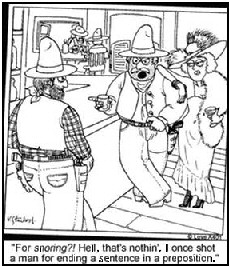 Most of the grammatical errors of the 21st century are careless, and
boring in comparison with the 19th century of Sheridan's Mrs Malaprop and Mr
William Spooner, which are rich in hilarity and wit.

Mrs Malaprop: thought does not become a young woman; the point we would
request of you is, that you will promise to forget this fellow -- to
illiterate * him, I say, quite from your memory.

* Obliterate.  A malapropism is where you replace a word with one of
a similar sound but different meaning.

Mr Spooner: You have hissed my mystery lectures.  (You have missed
my history lessons).  With Spoonerisms you swap the first letters of
words to make real words, as a result the sentence takes a comic turn.
One side effect is that once alerted, you cannot stop making up spoonerism,
especially if the frisky is running whee.

Perhaps you have trouble remembering people's names?  We know a
couple called Lick and Diz.

Just call me angel of the morning, angel; just brush my teeth before you
leave me."  (Brush my cheek) 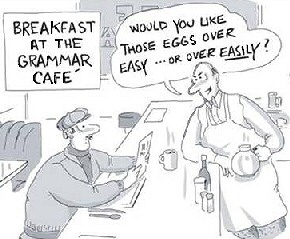 Funny Plurals
In the English Language 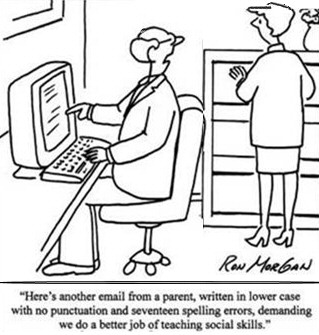 We'll begin with a box and the plural is boxes.
But the plural of ox
should be oxen, not oxes.

The one fowl is a goose but two are called geese,
Yet the plural of
moose should never be meese.

You may found a lone mouse or a whole set of mice,
Yet the plural of
house is houses not hice.

If I speak of a foot and you show me your feet,
And I give you a boot,
would a pair be called beet?

If one is a tooth and a whole set are teeth,
Why should not the plural
of booth be called beeth?

Then one may be that and three would be those,
Yet hat in the plural
wouldn't be hose.
And the plural of cat is cats and not cose.

We speak of a brother and also of brethren,
But though we say Mother,
we never say Methren,
Then the masculine pronouns are he, his and him,
But imagine the feminine she, shis and shim,
So English, I fancy you will
all agree,
Is the funniest language you ever did see. 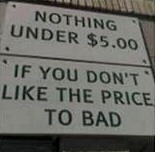 Apostrophe 'S
It's / Its

Letters 'i' and 'e' in a jumble
Their or there, and
even they're

Also from the University of the West of England, Are These 5 Grammatical
Mistakes,

Thanks to Rebecca Attwood at for her amusing article in Times
Higher Education Supplement which gave Will and Guy the idea to add examples
to our site.

"Separate" is the most commonly misspelt word in the English language,
according to a new study say Will and Guy

A spokesman for the market research company which carried out the study
of 3,500 Britons, told us, 'There seem to be some words which we always
struggle to get down onto paper, and "separate" is one of those which eludes
us. 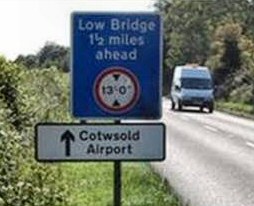 The sign on the A429 gets the "s" and the "w" the wrong way round in Cotwsold,
it should be Cotswold.

A spelling mistake has been spotted on an official road sign for an
airport in Gloucestershire, England.

I have a spelling checker.
It came with my pea sea.
It plane lee
marks four my revue
Miss steaks aye can knot sea.

Eye ran this poem threw it,
Your sure reel glad two no.
Its vary
polished in it's weigh.
My checker tolled me sew.

A checker is a bless sing,
It freeze yew lodes of thyme.
It helps
me right awl stiles two reed,
And aides me when I rime.

Each frays come posed up on my screen
eye trussed too bee a joule.
The checker pours o'er every word
To cheque sum spelling rule.
Bee
fore a veiling checker's Hour
spelling mite decline,
And if we're
lacks oar have a laps,
We wood bee maid too wine.

Butt now bee cause my spelling
Is checked with such grate flair,
Their are no fault's with in my cite,
Of nun eye am a ware.

Now spelling does knot phase me,
It does knot bring a tier.
My pay
purrs awl due glad den
With wrapped word's fare as hear.
To rite with
care is quite a feet
Of witch won should be proud,
And wee mussed dew
the best wee can,
Sew flaw's are knot aloud.
Sow ewe can sea why aye
dew prays,
Such soft wear four pea seas,
And why eye brake in two
averse
Buy righting too pleas.

Will and Guy recommend

However, Will and Guy have thought up some new, different, amusing and perhaps, funny quirky English collective nouns, which may make you
smile:

The Plain English Campaign is a group that has been fighting for crystal-clear communication since 1979. Consider some of these examples
of grammatical mistakes that made Guy and Will smile:

Less is not Fewer? - Tesco
Clear Up

Tesco supermarket has bowed to pressure from the Plain English Campaign
and scrapped checkout signs reading 'ten items or less.'

Critics insist that the signs should read 'ten items or fewer.' Tesco has
side-stepped a complicated grammatical debate by changing the signs to: 'Up
to 10 items.'

Footnote:
Please send us you examples of funny
grammar mistakes.