Here we have a Cockatoo called
Snowball strutting his stuff in time to the music.  Check out his foot beat
and head-bang
in time with the music of the Backstreet Boys.

Watch the funny video and see Snowball's big finish where he flicks that
yellow comb.

Snowball the Cockatoo - Listening to the beat

Snowball the Cockatoo - Dancing and head-banging to the music

Snowball the Cockatoo - Flicking his comb

Check out our Funny Cockatoo Video clip and see that cockatoo head-bang.

Jimmy Takes his wife Susan to a disco. There's a guy on the dance floor
giving it everything - break dancing, moon walking, back flips, the works.

Susan turns to her husband and says:
"See that guy? 25 years ago he
proposed to me and I turned him down for you."

Scientists Have Proof Say Will and Guy.  Neuroscientists in the USA
have proved that birds really do dance to music; after studying a cockatoo
shown on this web site.

Snowball has been viewed an amazing two million times on YouTube and this
has led scientists to discover that parrots, and also elephants do feel the
beat of music, giving them an in-built sense of rhythm for dancing. Also
researchers found no evidence that cats, dogs or chimps shared this trait.
Although we have heard some anecdotal evidence which suggests that some dogs
are able to dance.

Dr Aniruddh Patel, based at the Neurosciences Institute in San Diego,
California, said scientists began their research after becoming mesmerised
by the footage of Snowball. He reported, 'I was very impressed and contacted
Snowball's owner in Indiana for a more formal test. This showed that
Snowball wasn't just mimicking the movements of somebody off-camera. And his
movements followed the beat of his favourite BackStreet Boys song even when
the tune was sped up or slowed down.'

Dr Patel added that Snowball drifted in and out of following the beat,
'like a child does'. But he concluded that statistical analysis of the
cockatoo's head bobs showed they really were related to tempo.

Furthermore, Will and Guy have discovered that by analysing 1,000 videos
purporting to show animals dancing, the scientists found 14 species of
parrot and one species of elephant that they say were convincing dancers.

All this effort and Will and Guy can reveal that when dancing they both
have two left feet.

Interesting Facts About the Cockatoo 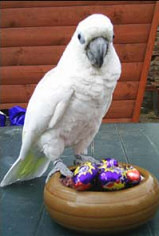 A cockatoo at a wildlife sanctuary has spent a fortnight trying to hatch a bowl
of chocolate eggs. Pippa has been protecting the chocolates since she was taken outside, put on a table and
saw them.  Her home is at the at Nuneaton and Warwickshire Wildlife
Sanctuary in England.

Her owner, Geoff Grewcock, reports, 'She went straight over, climbed on the
crème eggs and that was it. She thinks they're her eggs. Until she clicks
they're not real eggs, we'll just leave her there.' The 17-year-old cockatoo,
who has been at the sanctuary for about four years, is expected to live until
the age of 70.

'She's got so much character it's unbelievable. She hates men, we've had a
builder in who had his neck bitten. We had to prise Pippa's beak off his neck.
When she attacks you, she attacks your ear lobe - she goes straight through
them. We do free ear piercing here. She's ever so comical - always has been,'
adds Geoff Grewcock.

Everything about the Cockatoo is funny, his name, his crest and now to top
it off, here he is on skates.