We collect our stories from Pews News and other church publications.  Here is a snippet from the the Roman Catholic Holy Spirit Church in Marple, Stockport in the diocese of Shrewsbury.

New Carpet: There will be a discussion in May as to how we might raise funds for the new carpet.  All who wish to do something on the carpet should come forward and do so now. Baptisms: From now on, the North and South ends of the church will be utilised. Children will be baptised at both ends.

Church Service with a Difference

Seen on the notice board of a church: Try heeling our services. (Try our healing services?) You won't get better. Charity Begins at Church After the church service, seven year old Brian said to the preacher: 'When I grow up, I'm going to give you some money.' 'Well, thank you, 'the preacher replied, 'but why?' 'Because my daddy says that you're one of the poorest preachers we've ever had.'

Father O'Malley was driving down to Boston when got stopped for speeding in Medford. The highway patrol officer smelled alcohol on the priest's breath and then saw an empty wine bottle on the floor of the car. He said, 'Father, have you been drinking?' 'Only water', replied Father O'Malley. The policeman asked, 'Then how come I can smell wine?' The priest looked at the bottle and said, 'Good Lord! He's done it again.'

'Say what you will about the Ten Commandments, you must always come back to the pleasant fact that there are only ten of them.' HL Mencken
Know your Ten Commandments Henry, who was very elderly, was unhappy because he had lost his favourite hat. Instead of buying a new one, he decided he would go to church and steal one out of the entrance porch when the worshippers were busy praying. When Henry arrived at the church an usher intercepted him at the door and took him to a pew where he had to sit and listen to the entire sermon on 'The Ten Commandments.' After the service, Henry met the vicar in the vestibule doorway, shook his hand vigorously, and told him, 'I want to thank you Father for saving my soul today. I came to church to steal a hat and after hearing your sermon on the 10 Commandments, I decided against it.' The vicar answered, 'You mean the commandment ' Thou shall not steal' changed your mind?' 'No, 'retorted Henry, 'the one about adultery did. As soon as you said that, I remembered where I had left my old hat.' 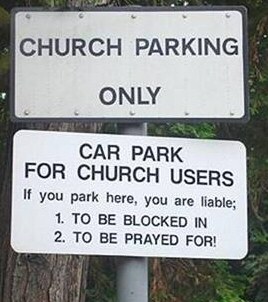 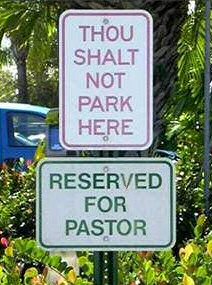 Reminder: What are the 10 Commandments?

Check out the Great American Book of Church Signs.  It captures modern day faith on the road.  Each sign reflects the enthusiasm of the local Church.  The book - and the signs themselves - encourage us to live better lives. Furthermore, Will and Guy love the way each Church sign reminds us to laugh along life's journey.

Out of the Mouths of Children

The Hand of God Little Philip was spending the weekend with his grandmother after a particularly trying week in infant school. His grandmother decided to take him to the park on Saturday morning. It had been snowing all night and everything was beautiful. 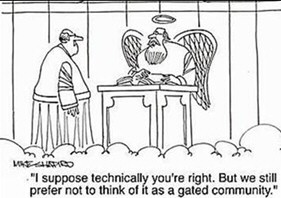 His grandmother commented, 'Doesn't it look like an artist painted this scenery?  Did you know God painted this just for you?' 'Yes, 'replied Philip, 'God did it and he did it left handed.' This confused his grandmother so she asked him, 'What makes you say God did this with his left hand?' 'Well, 'said Philip, 'we learned at Sunday School last week that Jesus sits on God's right hand.' Bible Study Richard, my friend's little grandson came home from Sunday School and I asked him what they had studied. His reply was, 'Nothing.' So I asked him, 'Didn't you study Jesus?' Richard's reply was, 'No, he wasn't even there.' 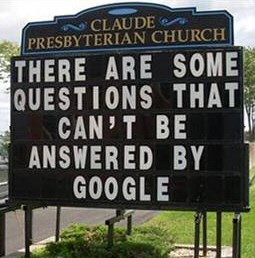 There are 3 fundamental truths about religion:
A rabbi, a priest and a minister walk into a bar. The bartender looks up and says, 'What is this, a joke?'

Martin arrived at Sunday school late.  Miss Walter, his teacher, knew that Martin was usually very punctual so she asked him if anything was wrong. 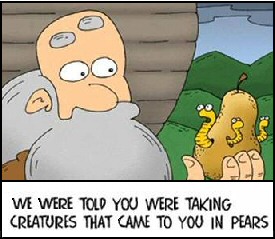 Martin replied no, that he had been going fishing but his dad told him that he needed to go to church. Miss Walter was very impressed and asked the lad if his dad had explained to him why it was more important to go to church than to go fishing? Martin replied, 'Yes he did. Dad said he didn't have enough bait for both of us.' Funny Religious Stories

Another Batch of Clean Religious Jokes

Father O'Malley and the Clever Beggars

Big Dave seemed to always fall asleep during the Sunday sermon. His wife, Martha, was fed up and decided to deal with the embarrassing situation. The next Sunday when he fell asleep, she quietly removed some pungent Roquefort cheese from a bag in her purse and passed it under his nose. Groggily startled, Big Dave blurted out, 'No, Martha, no, please don't kiss me now.'

For Father's Nicholas's 60th birthday, the congregation at St Mary's, Newark, England, decided to give him a present of a new suit. Father Nicholas was so moved by the gift that the following Sunday he stood before everyone and began his homily with a tear in his eye, 'Today I am preaching to you in my birthday suit.'

People find it surprising that there are more Catholic churches in Las Vegas than there are casinos. Visitors forget that residents live lives much like other people in other cities. So it is not surprising that worshipers give casino chips rather than cash when the collection basket is passed around in church. It is not considered wrong or offensive, as the chips have value and the churches need all the money they can get to carry out their missions. Since the worshipers donate chips from many different casinos, the churches had to come up with a method to efficiently convert them into cash, so they forged an agreement with the local Franciscan Monastery to consolidate the chips, make an accurate accounting of the amounts from each church, and cash them in at the casinos. It wasn't long before those who processed the casino bounty were given a most appropriate nickname. They were known as chip monks.

A large, well built man visited the vicarage and asked to see the vicar's wife, who was well known for her charity. As he spoke to her he said in a voice breaking with emotion, 'I'd like to draw your attention to the terrible plight of a poor family in this district. The father is dead, the mother is too ill to work, and the nine children are starving. They are about to be turned out into the cold streets unless someone pays their £400 rent arrears.' 'How frightful!' exclaimed the vicar's wife. 'May I ask who you are?' The enormous visitor wiped his eyes with his handkerchief and wailed, 'I'm their landlord.' P.S. Please write to Will and Guy if you have any clean religious jokes.