Never judge a book by its movie.  JW Eagan

Circus Strongwoman - Can you help her?

Sylvia Brumbach, a circus strongwoman who rips up telephone directories as part of her act has launched an appeal for 500 ' phone books to ensure her show can go on. German-born Sylvia, also known as 'The Woman of Steel', says she is about to run out of books after destroying over 100 at Blackpool Tower Circus in Lancashire, UK.

'I just brought 200 over from Germany ... I've used over half of them already, 'she told a reporter from the LA Times. Brumbach, who says she can tear a directory in half in around 30 seconds, has placed ads in local newspapers appealing for more books.'
You have to find the right point to rip, the book must not be too old and the spine must be tough, not wobbly', she said. M/s Brumbach also is known to juggle with bowling balls and steel bars.

Barney, the strongman, in the Circus Amsterdam squeezed the juice from an orange between his hands.

Barney, then said to the audience, 'I will offer £200 to anyone in the audience who can squeeze another drop from this orange.'

A thin, scholarly looking woman came forward, picked up the orange, strained hard and managed to get a drop of liquid.

Barney, the strongman, was stunned and he paid the woman and asked her, 'What is the secret of your strength?'

'Practice,' the woman replied smiling. 'I was the treasurer of the local church restoration fund for twenty-five years.'

The Roman Catholic Holy Spirit Church in Marple, Stockport in the diocese of Shrewsbury published in its April newsletter the following amusing snippets:

New Carpet: There will be a discussion in May as to how we might raise funds for the new carpet. All who wish to do something on the carpet should come forward and do so now.

Baptisms: From now on, the North and South ends of the church will be utilised. Children will be baptised at both ends.

Acting on a tip-off, Greek police officers raided a nunnery in the village of Filiro, near Thessaloniki in Greece.  It amazed them to find 35 healthy cannabis plants growing in the walled garden.

What the nuns told the police was, two gentleman offered to help them tidy the garden in the Greek Orthodox nunnery.  Summing up the circumstances, the officers believed the nuns when they said they had no idea that 'decorative plants' were really pot, or kánnabis in Greek.  Police are still trying to trace the two gardeners.

'I hope you didn't take it personally, Father,' an embarrassed woman said after a church service, 'when my husband walked out during your sermon.' 'I did find it rather disconcerting,' the vicar replied.

'It's not a reflection on you, Father' insisted, the church goer. 'Christopher has been walking in his sleep ever since he was a child.'

Nuns Get Their Skates On 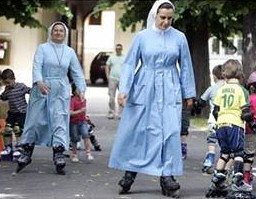 Sisters Mateja, Bernardica and Kresimira are teachers with a difference, Will and Guy can report. Living and working in the city of Zagreb, Croatia, they are also nuns with a difference. As you can see from our photo they wear roller skates while they work.

The sisters can be found at St Vinko Paulski kindergarten and nursery for underprivileged children in Zagreb. Their sense of fun has resulted in a waiting list to join the school. Sister Mateja finds that wearing skates brings the nuns closer to their charges and despite having broken her leg, while skating around the school, recently she hasn't stopped wearing them.

My word, how times change