Skip to content
Every now and then we find customs that are delightfully funny and a joy to pass on to our readers.  Here we present our top ten examples of strange, funny and unusual Christmas rituals from around the world. Indeed, it is tradition that give countries their individual characteristics. 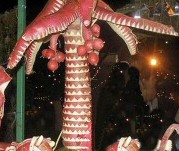 Burning of the Goat - A Very Funny Swedish Christmas Custom 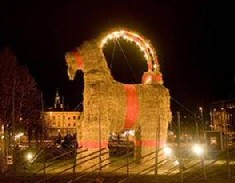 What started-off as an act of vandalism has become one of the most interesting Christmas traditions in Sweden. For over 40 years the Swedish town of Gavle has erected a giant Goat made of straw to mark the beginning of the Christmas holiday season. Every year vandals do everything they can to burn down the goat before Christmas Day. People ingeniously disguise themselves as Santa Claus or elves to get past the guardians and ignite the straw monument.  However, since 1966, the Straw Goat has survived until Christmas Day only 10 times.

The hiding of all brooms on Christmas Eve night is apparently a very old Norwegian tradition.  In days gone by people believed witches and evil spirits come out on this night looking for brooms to ride on, so they hid them in the safest places possible. Nowadays, Norwegian women still hide their brooms, mops and brushes before going to sleep, while the men sometimes sneak out of the house and fire a shotgun to scare off the witches. 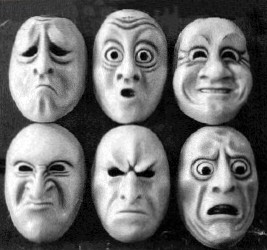 Germany used to hold "knocking Nights" [Klöpfelnachte] on the three Thursdays before Christmas.  Traditionally children used to dress in masks, bang lids and clang cowbells as they walked through their neighbourhood knocking on doors, reciting a poem and receiving a treat in return.  Sounds a little like trick or treat to Will and Guy. The bottom right mask looks like Boris Becker, but who are the other faces?

In Japan Christmas is widely celebrated as a day for romance, a day for sweet-hearts much like Valentine's Day in other countries.  Christmas cake is popular but it is a strawberry cream sponge with no traditional ingredients in sight. The main Christmas dish is a popular fast food fried chicken as that is how a traditional Christmas meal is depicted in local advertising. Women of 25 years and older who are single are jokingly referred to as "unsold Christmas cake".  Not very friendly think Will and Guy. Note: Sending red Christmas cards to anyone in Japan constitutes bad etiquette, since funeral notices there are customarily printed in red.

Food Throwing - A Strange Christmas Custom from Slovakia and Ukraine 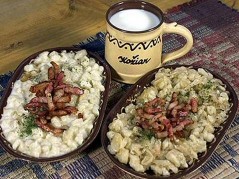 Will and Guy consider this Christmas ritual to be a rather messy one and we suggest that you do not try this at home. At the beginning of Christmas Eve dinner, the head of the family takes a spoon of *Loksa and throws it up at the ceiling.  The more mixture that remains glued on the ceiling the richer his crops will be the following year. Food throwing is a custom popular in many areas of Slovakia and the Ukraine, but the women that have to clean up the mess don't like it so much. We are not surprised!   A traditional Christmas dish made out of bread, poppy seed filling and water for the event. More Ukrainian Christmas Traditions An artificial spider and web are often included in the decorations on Ukrainian Christmas trees.  A spider web found on Christmas morning is believed to bring good luck. (Because it kills flies in Champagne!). A traditional Christmas bread called 'kolach' is placed in the centre of the dining table. This bread is braided into a ring, and three such rings are placed one on top of the other with a candle in the middle of the top one. The three rings symbolize the Christian Holy Trinity.

In Canada Father Christmas has his own personal zip code [postcode]; it is the alphanumeric number: H0H 0H0. (Ho-Ho-Ho) In this way people who write to Santa know that their letter will arrive safely.  It has been his personal code since 1982 and Will and Guy have learned that this address receives some 1 million letters from all over the world each year.  Apparently, each letter received will be answered in the same language in which it is written, which, on its own must be a mammoth task. Apparently, when it comes to gather around the tree this holiday season, most Canadians prefer to give (87%) gifts than to receive them (13%), according to a new Ipsos Reid poll conducted on behalf of World Vision Canada. While six in ten (58%) say the recent changes in the economy have caused them to re-evaluate this year's Christmas spending or traditions, the majority of Canadians continue to hold charitable gifts in high regard.

Caga Tio - A Funny and Unique Christmas Tradition from Spain 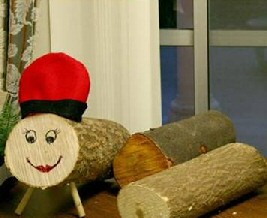 In Spain they have an unusual, and some might say strange, tradition of log presents called Caga Tio meaning "empty your bowels".  The custom calls for children to sings songs as they strike the log or Caga Tio which is made from a trunk of a tree with a face drawn on it and a red barratino hat added and wrapped in a blanked. Caga Tio sits on top of a small pile of presents in the lounge. On January 6th children, upon waking, run to strike their Christmas log as they sing songs that order Caga Tio to loosen his bowels and drop the presents. Usually small treats and nougats or chocolates are found under Caga Tio.  It is lots of fun but definitely a unique custom not known to be practiced elsewhere. And very grateful we are too.

In Caracas, the capital of Venezuela, the tradition on Christmas Eve morning the roads of the city are closed to cars, so people can roller skate to Mass. Furthermore we have learned that instead of Christmas carols people just beat their drums at midnight shouting 'Jesus is born' and like many Latin-American countries they let off firecrackers [fireworks] to light-up the sky. Christmas doesn't get an awful lot stranger than that. 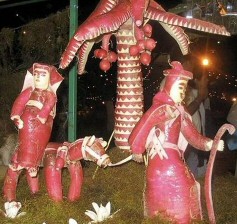 Night of the Radishes - A Unique Festival from Mexico Mexico has a famous Christmas Radish festival which is one of the most unique and spectacular festivals in the world. Huge radishes are grown but not to be eaten as they are pumped up with all kinds of things to make them grow huge. On the 23rd of December they hold "The Night of the Radishes" where competitions are held for nativity scenes sculptured and carved from giant radishes. Even children take knife to radish with painstaking concentration during competitions wanting to be the prized and honoured Christmas radish winner.

The Three Kings Day in Mexico

It's a Christmas in Mexico for children to write a letter to the Three Wise Men before the 6th January asking for the gifts they hope to receive. Just as American and British children might send letters to Santa asking for presents, children in Mexico write similar letters that also include explanations of how they've been good and deserve gifts. These letters are then tied to a balloon and lit so that they burn as they float away.  The smoke send offs the requests. You also can place the letters in a shoe, which is left under the nativity or Christmas tree. .

Throw The Shoe - an Unusual Tradition in the Czech Republic 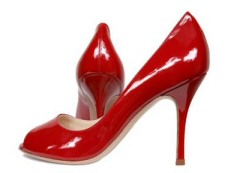 Talking of shoes, in the Czech Republic single women perform a very unusual ritual on Christmas Eve Day, to find out if they will marry in the following year. With their backs to the house door, they throw one of their shoes over their shoulder.  If the shoe lands with the heel towards the door, she will definitely stay single for another year, while if the front of the shoe points towards the door, it means she will move out of her parents' house, and she should start making wedding preparations.

More Christmas Tradition from Around the World

New Zealand: Santa's address in New Zealand is: Santa Claus Santa's Workshop The North Pole 0001. To contact Santa online go to www.nzpost.co.nz/christmas Australia: Santa can be contacted at Santa Claus, North Pole 9999 and last year he received some 90,000 letters UK: Santa can be reached by including the following postcode: SAN TA1 USA: Towns in the United States with Christmassy names are: Santa Claus, Arizona and Indiana; Noel, Missouri and Christmas, Arizona and in Florida.

UK: It is a British Christmas tradition that a wish made while mixing the Christmas pudding will come true only if the ingredients are stirred in a clockwise direction and each family member has a stir of the mix. Furthermore, a traditional Christmas dinner in medieval England was the head of a pig prepared with mustard. Syria: Christmas gifts are distributed by one of the Wise Men's camels. Christmas in Korea Young ladies skating in Mother Claus costumes in Yongin, Gyeonggi Province, South Korea.  Aren't they lucky to have ice and probably snow too.  Incidentally, South Korea is the only East Asian country to recognise Christmas with a national holiday. 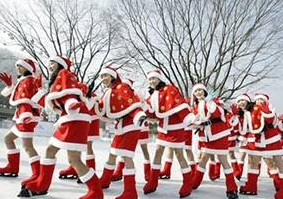 Continuing the current trend of large-scale mergers and acquisitions, it was announced today at a press conference that Christmas and Hanukkah will merge. An industry source said that the deal had been in the works for about 1300 years. While details were not available at press time, it is believed that the overhead cost of having twelve days of Christmas and eight days of Hanukkah was becoming prohibitive for both sides. By combining forces, we're told, the world will be able to enjoy consistently high-quality service during the Fifteen Days of Chrismukkah, as the new holiday is being called. Massive layoffs are expected, with lords a-leaping and maids a-milking being the hardest hit. As part of the conditions of the agreement, the letters on the *dreydl, currently in Hebrew, will be replaced by Latin, thus becoming unintelligible to a wider audience. Also, instead of translating to "A great miracle happened there," the message on the dreydl will be the more generic "Miraculous stuff happens." In exchange, it is believed that Jews will be allowed to use Santa Claus and his vast merchandising resources for buying and delivering their gifts. One of the sticking points holding up the agreement for at least three hundred years was the question of whether Jewish children could leave milk and cookies for Santa even after having eaten meat for dinner. A breakthrough came last year, when Oreos were finally declared to be Kosher. All sides appeared happy about this. A spokesman for Christmas, Inc., declined to say whether a takeover of Kwanzaa might not be in the works as well. He merely pointed out that, were it not for the independent existence of Kwanzaa, the merger between Christmas and Chanukah might indeed be seen as an unfair cornering of the holiday market. Fortunately for all concerned, he said, Kwanzaa will help to maintain the competitive balance. He then closed the press conference by leading all present in a rousing rendition of "Oy Vey, All Ye Faithful." *dreidel or dreydl is a Jewish top used in games  Footnote: Please send us your Christmas traditions from around the world.