But first a snow woman joke.
Why are snow women like snow flakes?
Each is beautiful.  They are all different, yet the can be as cold as ice.
However, they'll all melt away when they land on your face. 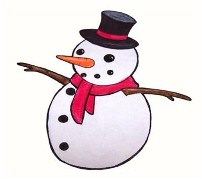 What Can These Snowmen Smell?

Can You Tell if a Snowman is Lying?

See if his nose grows! 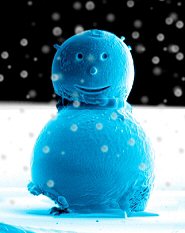 David Cox created the world's smallest snowman at the National Physical
Laboratory in West London.  Even at his fattest this tiny snowman is
less than the width of a human hair.  David created the structure from
two tin beads, which he usually employs to calibrate his electron microscope
lenses.  He used platinum to weld the tiny blobs to form the snowman.
He then focused an ion beam to carve the eyes and smile.  Lastly he
used another blob of platinum for the nose.

Frosty the snowman was a jolly happy soul,

With a corncob pipe and a button nose

and two eyes made out of coal.

Another Tranche of Snowmen Jokes

Snowman Takes to the Woods 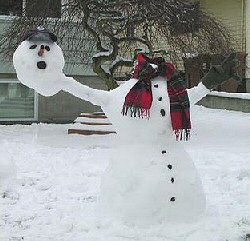 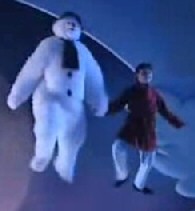 In Raymond Briggs' animation, a little boy called James wakes up to find a
blanket covering of snow.  It's magical to James and he rushes out of
his house and into the garden.  It's not long before he builds a
snowman.   That night James cannot sleeps so he decides to get up
check on his snowman.  As he opens the back door he is amazed because
the snowman has come to life!

James and the snowman begin a friendship which results in a magical
adventure to enthrall adults and children.

Never miss a chance to see the Snowman on T.V., and consider booking a
performance on stage, such as the Peacock theatre in London.

Here to the right are Frosty the Snowman and James 'Walking in the Air',
with Aled Jones doing the singing.