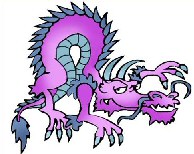 Here is Will and Guy's selection of fascinating information about
China and its culture.

Will and Guy's Twenty Amusing Facts and Trivia From
China

The Significance of the Chinese Dragon

Chinese around the world, proudly proclaim themselves "Lung Tik Chuan Ren"
which may be translated as Descendents of the Dragon. Unlike the negative
energies associated with Western Dragons, most Eastern Dragons are beautiful,
friendly, and wise. They are the angels of the Orient. Instead of being hated,
they are loved and worshipped.

Chinese dragons have a horse's head and a snake's body. Often they have four
jaws. Chinese dragons are divided into Heavenly Dragons, Earthly Dragons and
Dragons in water. The most well-known dragons are the Four Sea Dragon Kings
governing the east, south, west, north side of the sea. These Four Sea Dragon
Kings are in charge of creating clouds and rains for human world. Chinese people
do not call a water faucet a tap, but a "Water Dragon Head".

The dragon is regarded as the symbol of the Chinese nation and can be seen
everywhere in its culture: including literature, architecture, art, furniture
and even clothing.

Dragons are an important part of many Chinese festivals, including Chinese
New Year. In ancient China, dragons did not breathe fire. Dragons were wise and
caring. They guarded the wind, the rain, the rivers, precious metals and gems.

Many countries use dragons in their art, especially China, Korea and Japan.
It's easy to tell the difference between Chinese, Korean and Japanese dragons.
Just count the dragon's toes. Of course, you have to get really close. Sometimes
it looks as if they have 3 toes, when they really have 5, because some are
hidden from sight.  But, for a quick rule of toe:

Funny Legend of the Dragon

The farther dragons travel from their home in China, the more toes they lose.
Fortunately, Will and Guy have discovered, when wandering dragons return home to
China, all their missing toes grow back.  Since most dragons would prefer
to keep all their toes, all the time, few dragons ever wander very far from
home.

Footnote:
The Chinese word "stir-fry" is
expressed as "cao" in Mandarin and "chow" in Cantonese. More southern
Chinese (mostly from the province of Canton) traveled abroad than
northern Chinese in the old days (e.g. building railroads in America);
therefore, more Cantonese were "captured" into American English than
Mandarin. Another example of this is Chinatowns and Chinese restaurant
menus (up to 20-30 yrs ago) were mostly Cantonese influences (chop sui,
egg-fu-young, etc.).

So, I suspect "chow" was from stir frying a dish to mean eat or
eating.

A visitor to a zoo, who was worse for wear from drinking too much
alcohol, was badly injured trying to hand feed a caged bear. The rather
silly man from Shandong Province was freed from the bear's grasp after
keepers rushed to help.

Zoo officials indicated to Will and Guy that the man's actions
foolish in the extreme. He had apparently ignored warning signs
instructing him not to feed the animals or reach into their cages.

'If you ignore the safety warnings, you must take full responsibility
for the consequences,' a zoo official told us. You couldn't make it up.

One for luck: 20% of China's plants are used in medicine. 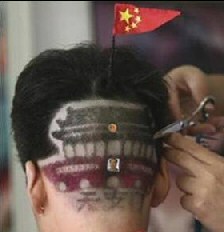 A man gets a haircut featuring Tiananmen Gate at a barbershop, to
commemorate the 60th anniversary [1949] of the founding of the People's
Republic of China, in Zhengzhou, Henan.

A bridegroom carries his bride on a bicycle on a street in Liuzhou,
southwest China's Guangxi Zhuang Autonomous Region. 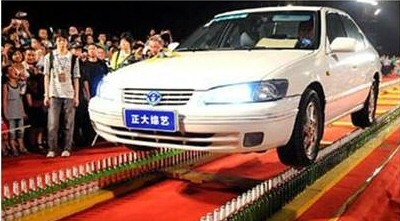 A Chinese man has made a stunning Guinness world record of driving
across two rows of bottled beers for over 60 metres in Wenzhou.

Li Guiwen, an army driver from Beijing, steered along 1,798 bottles
for 60.19m in a time of eight minutes and 28 seconds in eastern China's
Zhejiang province.  He had previously attempted the same record in
2009, but due to rain, the right tyre of his vehicle slipped off the
bottle track. Li, who thought of creating this record after a drinking
bet with friends, added, "Since the failure last year, I have been
training constantly."

Fire-fighters walk near flames towering from a pipeline explosion at a
port in Dalian in northern China's Liaoning province. 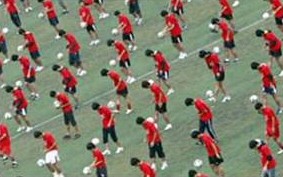 Over 1,000 Chinese people have broken a Guinness world record after
juggling footballs for 10 seconds together. The new record was created
over the weekend at Yanbian University when a total of 1,062
participants successfully completed the challenge in China's Jilin
Province.

This broke the previous record, set last year in Hungary by 792
people.

Fourteen-year-old Song Zixin was the youngest participant. He said,
'To attend this event, I practiced at home every day. The record I made
at home is juggling the ball for 303 times without touching the ground.'

Will and Guy are impressed by his dedication.

Footnote
Please send us your items of Chinese
trivia and interesting facts.