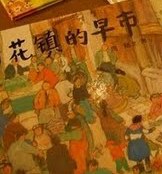 Here is Will and Guy's collection of Chinese zodiac and other stories to celebrate the lunar New Year.

A Story About The 12 Chinese New Year Animals

This is a story from China.  It is about twelve animals of the zodiac: a dog, a pig, a rat, an ox, a tiger, a hare, a dragon, a snake, a horse, a ram, a monkey and a cockerel. One day the twelve animals were having an argument.  They wanted every year to have a name.  'I think that this year should be named after me,' barked the dog.  'It should be called the year of the Dog.' 'No.' gibbered the monkey, 'I think this year should be named after me.' said the monkey.  'It should be called the Year of the Monkey.' 'No, no,' breathed the dragon.  'This year should be named after me.  It should be called the Year of the Dragon.' The gods were listening. They heard the animals arguing.  'Stop arguing,' demanded one of the gods. The dog stopped arguing. The monkey stopped arguing. The dragon stopped arguing.  They all stopped arguing and listened. The gods boomed, 'Can you see the big river? You must have a race across the big river. We will name this year after the winner of the race.' So, all the animals lined up on the bank of the river ready for the race.  They're off!  The animals jumped into the water and swam as fast as they could towards the other side. The ox was very strong and he could swim very fast.  Soon he was in front of all the other animals; but the rat was very clever. He grabbed the ox's tail and climbed onto his back.  The ox didn't know he was there. 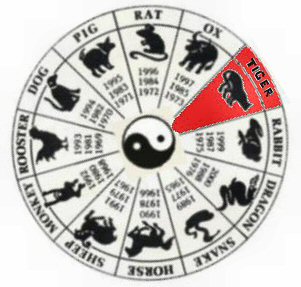 The ox thought he was going to win the race. Just before the ox got to the other side, the rat jumped off the ox's back onto the grass and won the race. 'Yippee! Hoorah!' shouted the rat, 'I'm first.' The ox was very surprised.  'How did you do that?' he asked, but the rat only laughed. The gods laughed too and said, 'The rat is the winner. We will call this year the Year of the Rat.  The ox was second, so next year will be called the year of the Ox. All the other animals finished the race. The tiger was third, the hare was fourth, the dragon was fifth, the snake was sixth, the horse was seventh, the ram was eighth, the monkey was ninth, the cockerel was tenth, the dog was eleventh and the pig was last. The gods decided that each year would be named after one of the animals in the race.  The animals didn't argue any more. They were very happy, especially the rat because he had won the race.

The Story of Nian

Our friend, Chou told Will and Guy this story about the beast, that lives under the sea or in the mountains, who often appears on New Year's eve to attack people, particularly children - however, as luck may have it some things frighten him. A long time ago during the age of great floods, and when the world was not a safe place, there was a vicious monster named Nian. Whenever the thirtieth day of the last lunar month arrived this monster would rise up out of the sea or he would come down from the mountains killing people and wreaking havoc in their fields and gardens. The people would bar their doors before dark and sit up all night, terrified. The next day they would leave their homes to greet their neighbours and congratulate them on surviving. Once on the last night of the last month, legend has it, Nian suddenly burst into a small village devouring almost all the people who lived there. Only two families emerged unscathed. The first were a newlywed couple who avoided harm because their celebratory red wedding clothes resembled fire to the monster, so it did not dare to approach them. The other family was unharmed because their children were playing outside setting off noisy firecrackers and the noise scared the monster away. Ever since then Chinese people have worn red clothes, set off firecrackers and put up red decorations on New Year's Eve to keep the vicious monster Nian away.

The Chinese New Year Story - The Colour Red and Fireworks 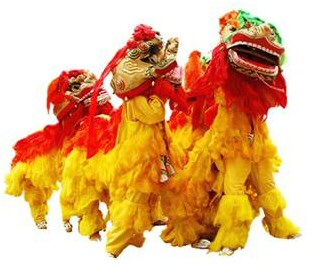 Will and Guy bring you these phrases, sayings and quotations translated from the Chinese to amuse and entertain you; perhaps you will find them thought provoking, also.
Confucius say: if you think we're going to sum up your whole life on this little piece of paper, you're crazy.

Eccentrics In China - Will He Do This in the New Year?

A Chinese trucker has been fined for having a shower while driving his lorry on a motorway.  Shortly after the Chinese New Year a police patrol car spotted water leaking from the driver's cab as it sped along the Jinyi expressway. 'We worried the driver may not have known about a mechanical problem so we signalled him to pull over at a service station,' a police spokesman informed Will and Guy. The police officers were shocked to see the driver was wet through and had been enjoying a shower via a sprinkler kettle system rigged up above his head. His wife, who was sitting in the passenger seat, had been holding up a sheet of plastic to protect the instruments from the water. She told police officers there were rushing to deliver goods in another city and she had rigged up the shower to keep her husband cool after the air-conditioning system broke down. Police fined the lorry driver and warned him he would be in serious trouble if he tried to have a shower at the wheel again.

Another Funny Chinese Story About a Truck Driver 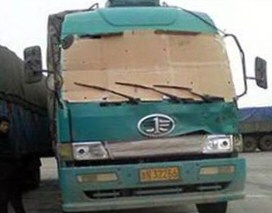 A truck driver was stopped by police in China after having driven hundreds of miles with a sheet of cardboard in place of his broken windscreen Will and Guy can report. Traffic officers ordered him to pull over after spotting him on the Jinggang'ao Highway in Henan province. 'The weather was extremely cold, but we saw a lorry with a cardboard windscreen and the driver had his head out of the side window all the time,' a police spokesman informed us. Mr Li jumped down from the cab with a face that was purple from the cold. He told officers he had been in an accident in Hubei province several days earlier but did not have time to repair it properly because of his tight delivery schedule. He admitted to police that he had driven with the temporary cardboard windscreen for an incredible 400 miles. Police escorted the truck to a nearby service station, and ordered Li to repair his vehicle properly before going back on the road.

The Magistrate and the Story of the Grape Trellis

In the first session after the new year a magistrate asked his court clerk, Xiang, how he got the scratches on his face. The embarrassed Xiang replied rather sheepishly, 'On the last night of the New Year celebrations I was walking in the yard, taking in the cool night air, when a grape trellis fell on me and scratched my face.' The magistrate frowned and announced, 'Only a wife could do this. Have her brought here this instant.'  However, the magistrate's own wife had been listening in the next room, and hearing this she stormed into the court.  The terrified magistrate shouted, 'Court's in recess. Clear the court. My own trellis is coming down.'

The Great Wall of China

Will and Guy bring you new information: 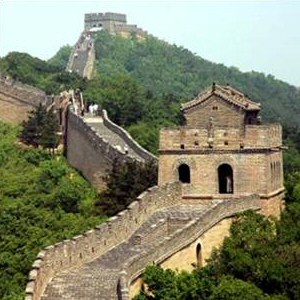 The Great Wall of China is even greater than once thought, after a two-year government mapping study uncovered new sections totalling about 180 miles, according to a report posted on the website of the *country's national mapping agency. Using infrared range finders and GPS devices, experts discovered portions of the wall concealed by hills, trenches and rivers that stretch from Hu Shan mountain in northern Liaoning province to Jiayu Pass in western Gansu province, the official China Daily reports. The newly mapped parts of the wall were built during the Ming dynasty [1368-1644] to protect China against northern invaders and were submerged over time by sandstorms that moved across the arid region, the study said. The additional parts mean the Great Wall - construction of which began more than 2,000 years ago to prevent incursions into China by the Mongols and others - spans about 3,900 miles through the northern part of the country. Recent studies by Chinese archaeologists have shown that sandstorms are reducing sections of the wall in Gansu to "mounds of dirt" and that they may disappear entirely in 20 years. These studies mainly blame the erosion on destructive farming methods used in the 1950s that turned large areas of northern China into desert. In addition, portions of the wall in Gansu were made of packed earth, which is less resilient than the brick and stone used elsewhere in much of the wall's construction. China in recent years has begun restoring parts of the wall as well as trying to curb commercial development on or next to the ancient structure. 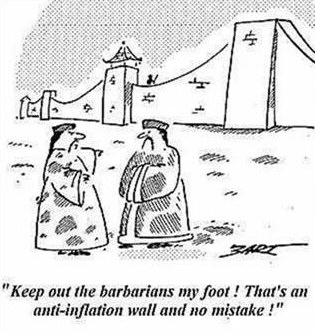 The wall's modern sections around the Chinese capital date from the Ming dynasty, including those restored since the Chinese Communist party took power in 1949, and several areas - including the most popular, Badaling, just north of Beijing - draw hundreds of thousands of visitors each year. Tourist encroachment also has been a major problem in recent years, with state media saying that near Badaling, almost every brick on a popular section of the wall has been carved with people's names or other graffiti. * The latest mapping project, a joint venture by the State Administration of Cultural Heritage and State Bureau of Surveying and Mapping, will continue into 2010y in order to map sections of the wall built during the Qin and Han dynasties [221 BC-9 AD].