In 2008 February 7th was the first day of the Chinese New Year. The Chinese New Year falls on a different date each year.  However, this is understandable because their ancestors used the new moon to fix the date of each new year.

2008 is the year of the rat.  This Chinese New Year is also known as 'Tze'. Unlike western calendars, the Chinese calendar has names that are repeated every 60 years.  In the Chinese 'Stem-Branch' calendar this is the 9th year of the 60 year cycle.  Within the 'Stem-Branch' system is shorter cycle of 12 years denoted by these animals: 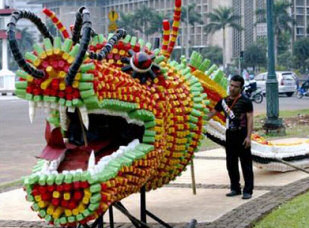 A Chinese town has made the world's longest dragon. Shuangfeng town, Taicang city, China, made the 2,008 metre long dragon to mark the 2008 Beijing Olympics. It is a mile and a quarter long and will need 1,200 dancers to support it at the town's traditional dragon dance. 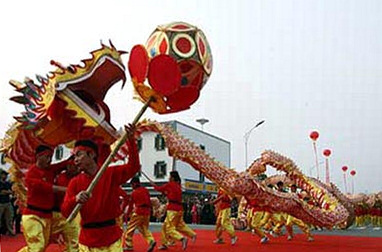 Apparently more than 10 workers worked over the months to make the huge dragon. It needed 4,200 meters of fabric and more than 300 bamboo poles recorded a China news Agency.

The price of hamsters risen threefold in China since the start of the Chinese New Year: the Year of the Rat.  The animals are considered lucky and more acceptable pets than rats. The Xinhua news agency identified hamsters as having a better image than rats or mice; also that they are more likely to be amiable and friendly. The Chinese word for rat, 'laoshu', covers a variety of animals that can include kangaroo rats, hamsters and moles. Pet shops have been selling out even at comparatively high prices of 30 Yuan [more than £2; approx. $3.90USD] for each hamster. Meanwhile, Nanning Zoo in southern China has been importing rat-like creatures from around the world in a tribute to the new year. Will and Guy have learned that the zoo's collection now includes kangaroo rats, hamsters, moles, marmots, and flying squirrels

For The Chinese New Year - The Colour Red and Fireworks

It was Chinese New Year.  Bill and Jackson had just staggered back home from a hard night's drinking when they noticed that a menu from the new restaurant next door had come through the letter box.  On a whim they decided to celebrate the Chinese New Year with a take-away. Jackson, was just off out of the door to fetch their meal when Bill turned to him and said, 'Please get me 20 number 6 while you're at the take-away. Jackson returned with their chicken Chou Mein, sweet and sour pork and 20 portions of egg fried rice.  Bill said, 'Where's me fags'. Jackson said, 'What cigarettes, you asked for 20 number 6 and that's what you've got, enough egg fried rice to feed a Chinese Junk from Shanghai to Hong Kong'. Bill said, 'When I was last in England Embassy No 6 was a packet of fags.'

Meanwhile, Bill and Jackson's wives decided to dine out a new Chinese Restaurant.  Jackson's wife Julie was inseparable from her Pekingese dog called 'Pepe'.  So they took Pepe along with them to the restaurant. Whenever they went to their usual restaurant the manager's wife looked after Pepe while they ate, and they thought it would be no different this new restaurant. Julie and her friend Rachel, gave Pepe to the owner and went to their seats. They ordered their meal, had a few drinks and eventually their meal arrived. They were mortified when it turned out to be their beloved Pepe surrounded by Chop Suey. As the owner explained the next day to Bill and Jackson, they thought that Julie and Rachel wanted the chef to cook the dog, not look after it while the women dined.

Prime Minister Chang was happy enough to write, but he didn't put in a lot of care into his brush strokes. Everybody sneered at his bad handwriting, and the Prime Minister himself really didn't care. One day Chang thought of a beautiful sentence and at once wielded his writing brush to write it down, indeed, there were dragons flying and snakes dancing all over the paper. Then he ordered his secretary to write it out neatly. When beginning to copy, his secretary stared tongue-tied and did not know where to start. The young man had to take the manuscript back to the Prime Minister. 'Prime Minister Chang, I can't read your handwriting, please tell me what words they are.' The Prime Minister read his cursive hand a long time, and did not know what Chinese characters they were, either. He then turned to blame his secretary. 'Why didn't you come earlier to ask me? I myself have forgotten the words which I've written.'

A simple example of Chinese characters showing how the sun symbol can be modified with a line to mean dawn. P.S. Please write to us if you have any examples of Chinese New Year humor.
Spread the humour