The date for the Chinese New Year in 2017 is January 28th.  This is the year of the Fire Monkey.

2017 is the year of the Rooster.  To be precise, this is the year of the Fire Rooster 'Ding You' 丁酉 . Fire being the fourth of the ten celestial stems and 猴 You (Rooster) is the tenth of the twelve terrestrial branches. Unlike western calendars, the Chinese calendar has names that are repeated every 60 years.  Within this 'Stem-Branch' system is shorter cycle of 12 years denoted by these animals:

Calculating 'When is the Chinese New Year in 2017'

The fact that the date of Chinese New Year varies within about a month is a clue that it's linked to the new moon.  As an almost infallible guide  the Chinese New Year follows the second new moon after the winter solstice.  The winter solstice always falls on December 21st, the next new moon is eight days later on December 29th 2016, and the second new moon is on January 28th 2017.

The rooster ranks tenth of all the animals in the Chinese zodiac. The rooster is a clever animal who is frequently compared to a smart person. Image is all important to the Fire Rooster; he spends a lot of time making himself look good, making him appear vain. He is flaunty and dramatic, yet he is a brilliant social organizer who loves to plan parties and gatherings. Fire Roosters tend to be bossy and this, combined with their bluntness, can cause hurt feelings and bruised egos amongst colleagues. Still, these Roosters make great leaders, who are creative, diligent and motivated. Likely Vocations for Rooster people: Roosters are more motivated than any other animal in the Chinese Zodiac. They are multi-talented. Good career choices are: trouble-shooter, detective, doctor, surgeon, psychiatrist, actor, dancer, musician, restaurateur, publicist, travel writer, journalist, soldier, athlete, teacher, police officer, book keeper, accountant. The Rooster's blunt manner and direct approach to life makes them poor diplomats. Rooster women are devoted to duty and seldom boast. They have exceptional vitality and patience and do well in jobs requiring carefulness and flexibility, like social work and teaching. Rooster's likes and aversions: Compatible with: Ox, Dragon, Snake. Avoid: Rabbit, Rat, and Dog. Hobbies: fishing, gardening, climbing, swimming, hiking.

Famous People Born in the Year of the Rooster 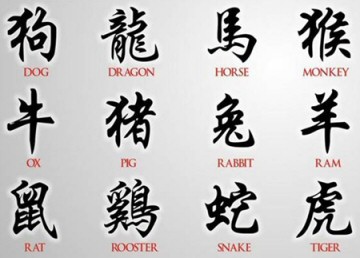 A man in a movie theater notices what looks like a rooster sitting next to him. "Are you a rooster?" asked the man, surprised. "Yes." "What are you doing at the movies?" The rooster replied, "Well, I liked the book."

The devout cowboy lost his favourite Bible while he was mending fences out on the range.  Three weeks later, a rooster walked up to him carrying the Bible in its mouth. The cowboy couldn't believe his eyes. He took the precious book out of the rooster's beak, raised his eyes heavenward and exclaimed, "It's a miracle!" "Not really," said the rooster. "Your name is written inside the cover."

A man was driving down a quiet country lane when out into the road strayed a rooster. Whack! The rooster disappeared under the car. A cloud of feathers. Shaken, the man pulled over at the farmhouse, rang the door bell. A farmer appeared. The man, somewhat nervously said, "I think I killed your rooster, please allow me to replace him." "Suit yourself," the farmer replied, "you can go join the other chickens, they're around the back."

It's been a tough year, but I've made it so far! 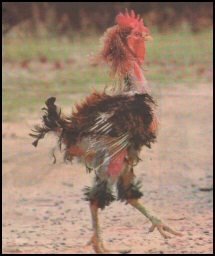 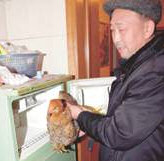 Gan Shugen took a chicken out of the freezer after two days and was shocked to find it was still alive. Gan Shugen, of Chengdu city, China, says the hen was a gift from a relative, reports Chengdu Evening News. It was wrapped in a thick plastic bag with its legs bound so, assuming it was dead, Gan put it straight in the freezer. Two days later, when he opened the freezer, he was amazed by what he saw. 'I heard weak sounds, and when I opened the bag, a red head popped out,' he said. 'It was still warm, and when I removed the tape, she could stand.' Li Fazhi, of the Chinese Association of Animal and Veterinary Sciences, said he was mystified and added, 'If the hen was locked in a fridge, that's still amazing; but if she survived in a freezer for two days, that's magic,' he said. Gan has said that he will not eat the chicken but look after it in his home. Footnote: Please write to us if you have any interesting stories about the Chinese New Year 2017.
Spread the humour