2010 is the Chinese year of the Tiger.  Specifically, this is the
year of Gēng-yín
庚寅 (Metal Tiger).  Here is a list of animals which
answer the question: What Chinese New Year?

The Chinese New Year Calendar
- With
Its Associated 12 Animals

The lunar Chinese New Year (CNY) calendar below shows which of 12 animals you are!  Naturally the
animal depends on the year in which you were born.  Note: if you were born in January or February you need to check if
your birthday was before or after the date of that Chinese New Year. (If it was
before this day your animal is the one shown for the previous year).

Unlike western calendars, the Chinese calendar has names that are repeated
every 60 years.  Within the 'Stem-Branch' system is shorter 'Celestial'
cycle of 12 years denoted by animals.  Furthermore, the Chinese believe
that people born in a particular year take on the characteristics of the animal
associated with that year.

Another dimension of the Chinese zodiac is the 5 'Terrestrial' elements of metal, water, wood,
fire and earth. 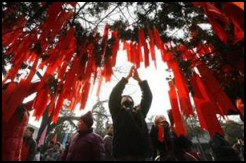 A man ties his New Year wish to a "wishing tree" at the White
Cloud Temple, Beijing, on the day of Chinese New Year.  See image
to the right.

A child in traditional costume takes part in the Chinese
New Year celebrations at the Dongyue temple, Beijing, China.  The
Lunar New Year is be marked with a week-long holiday.

Masks in Chinese culture are part and parcel of the world culture of
masks....... 面具 Mianju.  Masks first appeared in China during the Shang dynasty
over 3,500 years ago. The colourful and exciting celebrations for the
Chinese New Year last for many days, and end with the famous lantern
festival.

The development of Chinese characters can be dated back to about
4,500 years as discovered at Yanghe, Shandong Province in recent years.
There are about a dozen pottery wine vessels unearthed, which have a
character each. Those characters are quite close to the oracle
inscriptions carved by the ancients of the Shang Dynasty [16th to 11th
century B. C.].

Here is the Chinese name for Guy Thomas 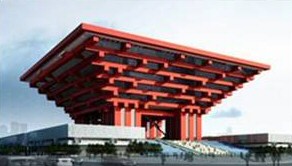 World Expositions are galleries of human inspirations and thoughts.
Since the Great Exhibition of 1851 was held at Crystal Palace, London,
the World Expositions have attained increasing prominence as grand
events for economic, scientific, technological and cultural exchanges,
serving as an important platform for displaying historical experience,
exchanging innovative ideas, demonstrating esprit de corps and looking
to the future.

Expo2010 will take place in Shanghai, China. Will and Guy would like
to share with readers what can be expected at this 2010 exposition.

Footnote:
Please write to Will and Guy if you have any
information about 'What is Chinese New Year'.