Chickens on the Road

On October the 11th 2007 a lorry load of chickens were being taken from a
farm where they were raised to the slaughterhouse.  2,500 birds managed to carryout a daring escape on the A80 near Haggs in Scotland.

When the lorry jack-knifed, true to form, instead of heading for the hills, like headless chickens they dashed about all over the dual carriageway.  What they did achieve was to bring much of the traffic between Glasgow and Stirling
to a halt.

We would like to wish the lorry driver a speedy recovery, for him it was not funny as he sustained severe back injuries.  Naturally, there were casualties amongst the chickens and about
500 died in the escape. 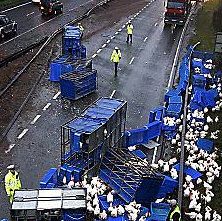 Those filming on
mobile phones became so annoying and intrusive that the police despatched a special unit to take the registration numbers of the worst offenders.  At least 50 motorists can expect to receive £60 fixed penalty notices, (when the postal strike is over!).

Meanwhile most of the chickens, who had known nothing but a battery existence, were disorientated by their sudden exposure to wide open spaces and just hung around in groups waiting to be captured.
Local farmers said that wild chickens would have behaved in exactly the same stupid manner.
However, one chicken made his getaway....

What Next for the Escaped Chickens?

Those chickens that were captured were
packaged in crated and sent to the processing plant.  However, entrepreneur were trying to
decide how they could profit from this fowl play.  One budding tycoon had the idea of by buying up the escaped chickens and then selling them to restaurants, who could then serve them up: 'As seen on the A80'.

So far his marketing success has been confined to fast food outlets on the A80 where they escaped - see picture to the right.

Efel the hen was left a little shell shocked after laying this monster
egg. It took the gingernut ranger 30 minutes to squeeze out the whopper,
which at 7oz is three times the size of a normal one.

All Time Egg Record
Will and Guy can tell you that
the biggest egg was 11oz, laid by an English hen in 1896.