Charles John Huffam Dickens was born in Portsea, Portsmouth, England, in 1812. His father was a clerk in the Navy Pay Office, stationed at
Portsmouth. Although his job was well paid, his father had a weakness for spending money and spent much of his life in chronic bankruptcy.

In 1824, when Charles was just 12 years old, his father was sent to debtor's jail. Charles Dickens was sent to a boarding house and given a 12 hour-a-day job preparing bottles of shoe polish in a blacking factory. But Dickens' fortunes improved: a sudden inheritance allowed his father to pay off his debts and he sent Charles to school.

Dickens Starts Writing
At age fifteen Charles was placed as a clerk in the office of an attorney, a friend of his father's. In his spare time he studied hard to become a Parliamentary reporter.  At age nineteen he entered the parliamentary gallery as a reporter for 'The Mirror.' It was a well-paid job and he soon became known as one of the best shorthand reporters in London.

Dickens began writing fiction at age 21, under the nom de plume of *"Boz". In 1836, when Dickens was 23, he began writing a series of short stories [The Posthumous Papers of the Pickwick Club] which appeared in cheap monthly instalments.

By the age of 24 he had become internationally famous.

It may be said that Charles Dickens burst onto the literary scene at a unique moment in English history because until the end of the 18th century, England had been a mainly rural society. But from the late 1700's onwards, land holders started forcing people off their land to make way for sheep farming. At the same time the Industrial Revolution was creating new towns and cities with belching smoke stacks and factories that needed workers - the English countryside was emptying and a new urban working class was emerging.

A New Market for Serials
The concentration of people in towns and cities created something that had never existed before - a mass audience. Newspapers,
Magazines and Newsletters sprang up to cater for this new and growing demand.

Books were being serialized in Newspapers and Magazines - those who couldn't afford to buy a book could read it in weekly instalments. Dickens wrote and published most of his novels in this fashion - a chapter at a time.

Between 1837 and 1839, Dickens wrote three of his most famous novels Pickwick Papers, Oliver Twist, and Nicholas Nickleby. In the first
ten years of his writing career, the manic part of Dickens' manic depression had given him an endless source of energy and inspiration, but now he began to succumb to depression.

Dickens the Traveller
In the 1840's he started to experience writer's block. He would spend days locked up in a room, unable to put words on paper. He wrote:
'Men have been chained to hideous walls and other strange anchors but few have known such suffering and bitterness...as those who have been bound to Pens.'

Dickens was an extremely energetic man and a compulsive traveller. He travelled the length and breadth of England, Scotland and Wales and also made frequent trips to France and Italy. In 1842 he spent six months in America, where he was given the kind of reception reserved for modern day rock stars.

In 1856 Dickens purchased a large residence in Kent, the kind of house he had always dreamed of owning.  Although Dickens became wealthy, he never forgot his origins. Throughout his life he visited the factories, the slums, the jails and the poor houses. Indeed, his novels were a social commentary on the appalling conditions of 19th century England. He was well known for his generosity and received
requests for money wherever he went.

He is considered by many to have been a genius and the greatest English writer of the 19th century. 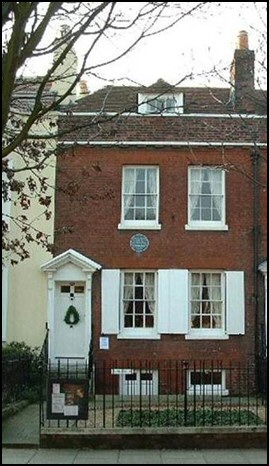 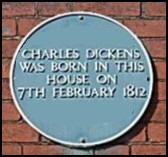 A Funny and True Story about Charles Dickens

Charles Dickens, during one of his many visits to Paris, France had his watch stolen whilst at the theatre. This watch had been given to him by Queen Victoria, and was, therefore, very much prized by him.

On returning to his hotel, Dickens found a small parcel waiting him, to which was pinned the following note:

'Sir, - I hope you will excuse me, but I assure you I thought I was dealing with a Frenchman and not a countryman. Finding out my mistake, I hasten to repair it as much as lies in my power, by returning you herewith the watch I stole from you. I beg you to accept the homage of my respect, and to believe me, my dear countryman, your humble and obedient servant,

By the time we hit fifty, we have learned our hardest lessons. We have found out that only a few things are really important. We have learned to take life seriously, but never ourselves.

Footnote: Please send us your interesting facts about Charles Dickens.