When I was a boy, my uncle John told me a tale about a trick that he played in a cemetary.  One night my uncle spotted his friend Eddie wending his way home from the pub. As he watched, Eddie took the shortcut through the cemetary, rather than the longer way via the round ring.

There was no doubt that Eddie was the worse for wear, and appeared disoriented. Then he cried out to nobody in particular, 'Where am I'.

John whispered from the graveyard, 'Amongst the living'.

'Where are you', cried Eddie.  To which John replied in his most sepulchral voice, 'Amongst the dead'.

Eddie sobered up instantly, and would never again take the short cut though the churchyard after dark. 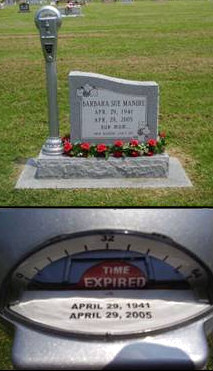 Will and Guy think that this parking meter epitaph sums up this page. Graveyard humour needs to be handled carefully, with style and with dignity; people's feelings must be considered, in this case the parking meter is what the deceased asked for.

This is the site of an actual grave in Okemah, Oklahoma, USA. The deceased had an active sense of humour when alive and had wanted a parking meter on the site of her burial. Her daughter supplied the parking meter with 'Time Expired' notice - see inset below.

On the memorial stone is written: Her Humor Lives On.

A hairdressing salon opened next to the local graveyard. It was named, rather distastefully, "Curl Up and Dye."

Please join Will and Guy in remembering a great icon of the entertainment community.

The Pillsbury Doughboy died yesterday of a yeast infection and complications from repeated pokes in the belly. He was 73. Doughboy was buried in a lightly greased coffin.

Dozens of celebrities turned out to pay their respects at his funeral, including Mrs Butterworth, Hungry Jack, the California Raisins, Betty Crocker, the Hostess Twinkies.  Captain Crunch sent his apologies. The gravesite was piled high with flours.

Aunt Jemima delivered the eulogy in the graveyard and lovingly described Doughboy as a man who did not realize how much he was kneaded. Doughboy rose quickly in show business, but his later life was filled with turnovers. He was not considered a very 'smart' cookie, wasting much of his dough on half-baked schemes. Despite being a little flaky at times, he still, even as a crusty old man, was considered a roll model for millions.

Doughboy is survived by his wife, Playa Dough; two children, John Dough and Jane Dough; plus they have one in the oven. He is also survived by his elderly father, Pop Tart. The funeral was held at 2:50 for about 20 minutes.

Obituary kindly sent in by Johnny.

I always wondered if Karl Marx's grave was a Communist plot.

Another popular spoof is that Karl Marx was Groucho's 5th Marx Brother.

Everyone was dismayed that Peter had died. A popular man, he had left Moira, his wife, strict instructions in his will for his wake to be a jolly and happy affair: a celebration of his life. To this end Peter had left £25,000 [$ 52,000 USD] in his will for the party.

'I'm sure you're right,' replied her friend, Alice, who lowered her voice and leaned in close. 'How much did all this really cost?'

'All of it,' opined Moira, 'every penny of twenty-five thousand pounds.'

Alice worked out the arithmetic in her head, 'Eh?' she exploded for a second time, '£17,500 for a memorial stone? My goodness, how big is it?' Moira shows Alice her ring finger, 'Oh about 30 carats,' she smiled.

'Well,' continued Mary Roberts, 'could I please wait for her then?' Allan showed her into the drawing room and left her there for more than
three hours. The saleswoman began to feel a little worried so she called out to Allan and asked, 'May I know where your wife is?'

'She went to the cemetary,' he replied. 'And when is she coming home?' queried Mary Roberts.

'I don't really know,' Allan said and then he added. 'She's been there eleven years now.'

Sean and Wayne were walking home after a party and decided to take a shortcut through the cemetary.

When they were right in the middle of the cemetary they were startled by a tap-tap-tapping noise coming from the misty shadows. Catching their breath and trembling with fear, they found an old man with a hammer and chisel, chipping away at one of the headstones.

'Great grief, Mister,' said Sean, his voice quivering, 'You scared us half to death. We thought you were a ghost! What on earth are you doing
working here so late at night?'

'Those fools,' the old chiseller grumbled, 'they've misspelled my name.'