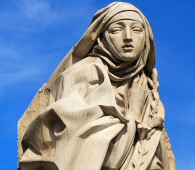 This is a day with several meanings: arrival of winter in Estonia, the
martyrdom of St Catherine by the Romans and Catherinettes Day in France.

One ancient custom is that on 25th of November the girls should visit a
statue of St Catherine, where they make a little prayer for a husband.

Saint Catherine be good
We have no hope
but you
You are our
protector
Have pity on us
We implore you on our knees
Help us to
get married
For pity's sake, give us a husband
For we're burning with
love
Deign to hear the prayer
Which comes from our overburdened hearts
Oh you who are our mother
Give us a husband

In England we have a shorter folk saying:

A Historical Perspective
on Catherine

St. Catherine: although a noted Christian saint and martyr she was
probably a mythological invention; un-documented sources put her as a
scholar in the early 4th century.

Martyrdom: As a Christian, Catherine of Alexandria, (Saint Catherine of the Wheel) was sentenced
the Roman Emperor Maxentius, the barbaric method in favour for women was
torture then death on the wheel.  However, when Catherine was placed on
the wheel it was the one that broke.  She was then beheaded, and later
achieved the status of Saint.  Incidentally, Joan of Arc said that
Saint Catherine appeared to her on more than one occasion.

In the late middle ages St. Catherine was one of the most
influential saints and her feast day on November 25th was a popular one.

Catherine of Aragon was born on 16th December 1485, died 7th January 1536
- was also known as Katherine or Katharine, and she was the first wife of
King Henry VIII, (and also the first wife to Henry's older brother who died,
Arthur, Prince of Wales). She lived in Bedfordshire as the Queen of England
at Ampthill 1531 to 1533, until Henry VIII divorced her.

There is a local recipe from Bedfordshire to celebrate St. Catherine's
Day on the 25th of November, with cakes which were also named after
Catherine of Aragon, a famous Tudor inhabitant of the county. It can be
found on
this recipe page.:

The traditions of Catterning appear to Will and Guy to be very similar to
those of Souling which is celebrated on the 2nd November.

Indeed, Charlotte Burn, in 1914, argued persuasively that these were all
aspects of the same custom, we have learned.

The traditions of Catterning were first mentioned in 1730 and like 'souling'
beggars and children went around on the 25th November to houses singing and
knocking on doors for cakes and breads, (in some counties it was for apples
and beer). However Charlotte Burn noted that Catterning, unlike Souling, was
(probably) mainly a tradition for women, and/or women dressed up like men.

The Reverend WD Parish, Vicar of Selmeston, Sussex, England, in 1875
records this tradition as: "catterning". To go catterning is to go round
begging for apples and beer for a festival on St. Catherine's Day, and
singing:

'Cattern' and Clemen' be here, here, here,
Give us your apples and
give us your beer,
One for Peter, Two for Paul,
Three for him who made
us all ;
Clemen' was a good man,
Cattern' was his mother;
Give us
your best, And not your worst,
And God will give your soul good rest.' 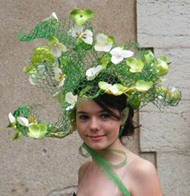 In France women who reach the age of 25 and are not married are called
Catherinettes.  Their motto is: 'Lord, give me a husband who's
bearable, or who can at least pass as bearable in the world!'
Whereas French girls under 25 would pray: 'Lord, give me a well-situated husband. Let him
be gentle, rich, generous, and pleasant!'

Catherinettes form support groups, and they can be recognised by their
hats, which are yellow (for faith) and green (for wisdom), topped off by
some eye-catching feature.  Tradition has it that Catherinettes should
wear the hat for the entire day without taking it off even indoors.
Milliners in France, and elsewhere, have not been slow to produce ranges of
hats to celebrate St Catherine's Day. 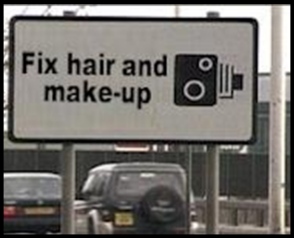 Vicky, a young single lady visits the local dating agency and explains,
'I'm looking for a husband.  Can you please help me to find a suitable
one?'

'Well, let me see.' Vicky says, 'He needs to be fine looking, polite,
humorous, sporty, knowledgeable, good at singing and dancing.  Willing
accompany me the whole day at home during my leisure hours, if I don't go
out.  Telling me interesting stories when I need companion for conversation
and be silent when I want to rest.'