The Shrovetide Spectre By Leslie Oldfield 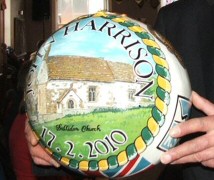 Many people mistakenly think that ghosts are only found in derelict mansions and graveyards. Furthermore, they think they only appear at night and only when there are few living humans around and subsequently, therefore, feel safe in city centres and crowded places. The fact of the matter is, however, that dead people have similar predilections to living ones.

Ashbourne, in the county of Derbyshire, holds a special football match every Shrovetide between the Up'ards and Down'ards. Those that live north of the Henmore brooke, which runs through the centre of the town, support The Up'ards and those that live to the south of it support the Down'ards. It is a very popular event with many people from all parts of Britain and abroad visiting the town to witness the annual event.

Thousands of people gather to see the ball being turned up and one year one of them was a young woman called Janet Booth who had travelled all the way from Auckland in New Zealand to watch the famous match. She had travelled on her own and was very happy and exhilarated to be amongst so many people and was enthralled by how hard and rough the game was. Coming from New Zealand she was used to watching hard fought matches but the Shrovetide game, she thought, was in a different league all together.

Whilst she had been in England she had been befriended by a young man, who was called Peter, she had met in a Sheffield pub. They had become close friends and it was him who had suggested that they go to Ashbourne to witness the historic spectacle. Peter, like Janet, was a student and had also, like her, done his fair share of backpacking. As it was her first visit to Britain, Peter was eager and happy to show her around the country and explain to her the customs and history of his homeland.

They laughed and joked with each other as the match snaked its way around the town and, being as the game would last eight hours, they took an occasional break in one of the town's many hostelries. In one of them, named the "The George and Dragon", they entered into conversation with some of the locals. An old man by the name of Ted told them that in the old days the match used to be played a lot rougher and that when he played for the Down'ards in the 1950's it used to take him days to recover from the contest.

"Nowadays", he mused, " they are as fresh as daisies on the Thursday and don't have the amount of bruises that we collected. They played, y'knows, with hob nailed boots in them days". Janet and Peter smiled at him and drank up their beers and then went out looking for where the action of the game was taking place.

The joyful shouts and screams of the children led them to the riverbank where "the hug" was taking place. It was a comedic scene with grown men grappling with each other in the middle of a river in an English winter. The children and adults, in the watching crowd, were all cheering and egging on the players and Janet started to film the hilarious events on her mobile phone. Eventually, one of the players managed to throw the ball up on to the riverbank and an opportunistic Down'ards player grabbed the ball and ran off in the direction of the town centre. The other players ran after the fleeing one in hot pursuit and they, in turn, were then followed by the mass of spectators. The whole thing resembled a medieval battle with chaos and confusion everywhere and no one knowing who was winning or losing.

A camera crewman from a German television station, who did not get out of the way quickly enough, was jostled to the ground and Janet and Peter now realised why all the shops in the town had been boarded up. It was amazing and unique, Janet ruminated, how the spectators could become , in an instant, participants in the melee. Unbeknown to both Janet and Peter, and everyone else for that matter, was the fact that the Shrovetide match was not only being watched by the living but was all so being watched by the ghosts of players of the past. One of the spectres was a man called "The Brock" who had taken part in many matches in the 1930's. He had been given
the soubriquet- which is the old British name for a badger- for the tenacious way he used to hang on to the ball in "the hug". He was famed for his courageous ability and many hundreds of people attended his funeral when he died in 1965.

It happened that when Janet caught up with the players, and was at the nearest point to the actual position of the ball than she had been all during the day, the ball suddenly broke and all hell was let loose. Like a group of stampeding horses the players chased after the ball and Janet, unfortunately, was directly in their path. She didn't know what to do and just screamed in horror and hoped she would see the morrow.

She was not the only one taken by surprise by the turn of events for "The Brock" was in the line of the charging gladiators as well and, craftily, turned and ran in the direction of where Janet was standing and used his spiritual power to save the situation. Janet felt like a slab of ice was being forced through her body and began to shake like a leaf. She let out a gurgled cry and found herself lying on the street looking up at the legs of the players running past her. She could just see the sweat cloud, which gave an indication of where the match ball was, disappearing into the distance and thanked god that she was safe.

She managed to get to her feet but was still shaking when Peter ran to her and asked her if she was alright. She said to him that she had never been as frightened in her life before and never had she felt so cold. He took off his coat and in an act chivalry put it around her to stop her from shivering. Even so, it took her a good twenty minutes before she felt warm again and she then thanked Peter for his thoughtfulness.

The reality of the situation was that although she thanked god and Peter for her salvation she should also have given gratitude to the Ashbourne ghost for it was "The Brock" who had taken her out of harm's way. Indeed, it is surprising how many people over the years have been saved by him and did not realise it. Moreover, I think it should be better known that if you attend the Shrovetide match and experience a sensation like a collision with an iceberg you will have probably had an encounter with the Shrovetide spectre.

Shrovetide football in Ashbourne, Derbyshire, England is something different, a unique game.  On Shrove Tuesday, and also on Ash Wednesday, the Up'ards play the Down'ards, it's a no holds barred game of football with the goals three miles apart.

Instead of a kick-off, Shrovetide has a 'turning up' where a dignitary throws the special ornate ball into the crowd and the game starts.  The event first came to the wider public's notice when in 1928 the then Prince of Wales (Later abdicating King Edward VIII) got caught up in the mêlée.  Without modern-day protection officers he got sucked into the scrum and came out with his nose bleeding.

The only rules are:
You must not intentionally cause harm to others

No motorised vehicles
No hiding the ball in bags or rucksacks
No trespassing, especially in churchyards.