Here are a collection of hoaxes from April Fool's Day 2009.  These same types of pranks will be a rich source of hoaxes for the 2011 season.

2009 April Fool's Day Hoaxes - Will and Guy Reveal All 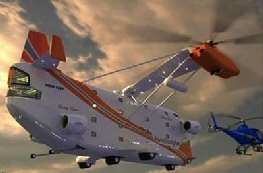 Google are beginning to make a name for themselves as April Fool's Day pranksters.  In 2009 they offered an "autopilot" tool for Gmail.
The idea was it would send out the appropriate automated responses to messages. "As more and more everyday communication takes place over email, lots of people have complained about how hard it is to read and respond to every message. This is because they actually read and respond to all their messages," said Google.

Google introduced the CADIE artificial intelligence service, which stands for Cognitive Autoheuristic Distributed-Intelligence Entity, it had a "mind of her own" and the potential to "change the world". Its Google Brain Search tool would use CADIE technology to index web users' brains, "improving the speed and accuracy of memory retrieval" and eliminate "tip of the tongue syndrome". CADIE even had its own logo a cartoon panda with her own website.

Switzerland's St Bernard dogs used to be famous for finding avalanche victims and reviving them with a tot of brandy.  Now these lovely big dogs have been forced to adapt to the harsh economic climate. From Wednesday 1st of April the barrels round the necks of the Swiss Alpine Club's 133 mountain rescue dogs will be replaced by miniature Nespresso-style coffee machines.

"It was a purely business decision," said Jörg Ettinghadt from the Swiss Alpine Club.

"The global financial crisis has meant we've got to either cut back the number of dogs or find some extra money. Using the Desperesso machines means we won't have to reduce the dogs.

Ettinghadt told us that the 3kg appliances work on the same "capsule" principle as the best-selling high-street models but with a few practical alterations.

"Every second counts when it comes to surviving an avalanche - the chances of survival have been estimated at 85 per cent within 15 minutes, 50 per cent within 30 minutes and 20 per cent within one hour. A warming drink of coffee - can make all the difference," he said.

The Conficker.c virus was predicted to become virulent on April 1st 2009.  What seems to have happened is that thousands, possibly millions of machines have been infected, but so far the infection has not done anything malicious.  However, it was predicted that on April
1st a master computer would be programmed to gain control of these infected zombie machines.  In the event, nothing materialized, it
was like the false alarm with millennium bug.

Incidentally, Conficker, is also known as Downup, Downadup, and Kido. While the virus authors have not been caught, the Conficker threat
recedes day-by-day.  If you are unfortunate enough to be infected search for a detection and scrubber utility from an anti-virus site such
as McAfee or Trend Micro.

Stop press: Conficker.c exploits a vulnerability that Microsoft patched in October 2008 as part of Microsoft Security Bulletin
MS08-067.  However, about 20% of all Windows machines worldwide are still not protected against this vulnerability.

Last year, 5,803 people claimed non-residency for tax. The Revenue believes that 440 of those are "high net worth" individuals. "These are
the people who we'd be aiming this proposal at," a spokesman for the department said.
Foreign-based Irish millionaires can avoid Irish tax if they spend fewer than 183 days in the State. Last November, Minister for Finance Brian Lenihan abolished the so-called "Cinderella" rule, whereby an individual is not deemed to have spent a day in the country if they leave by
midnight. 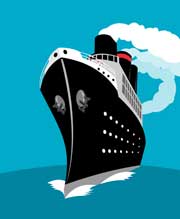 Initially, time shares will be available through the national press and by applying on-line on the cruise operator's website. Time share holders can take up to six brief luxury cruises a year.

Tickets will also be available to non-time share holding customers on a strictly first-come-first-served basis for specially reduced rates that match or are well below prices for similar cruises by other operators.

All of the ship's usual facilities will be available to time-share passengers including the bargain liner's leisure suite, theatre/cinema, crèche and library; although the swimming pool will only be heated for a few hours in the morning to encourage passengers to take a swim rather than have a shower.

All passengers will be encouraged to make their own entertainment by participating in karaoke, amateur dramatics, and stand-up comedy.
Midnight buffets will be replaced by vending machines selling drinks and snacks at reasonable prices. Passengers will also be encouraged to bring on board their own alcoholic drinks - to keep their extras down. All meals will be served on re-usable plastic plates which, at the end of each cruise, will be burnt in the ship's furnaces with other waste to reduce fuel costs.