On April 1st 1962, Kell Stensson appeared on Swedish T.V. to explain how you could exploit the moiré effect to turn black and white television into 256 color.

Kell explained that all you needed was a pair of nylon stockings.  He said that best of all were the newly introduced tights.  He proceeded to demonstrate how you could tune the television by pulling the tights over the screen.  He claimed that 25 denier worked best.

40 denier caused the picture to go very dark.  We have to remember that television sets were smaller in the 1960s, so it was then possible to stretch nylons over those little screens.

It was rumoured that insiders bought shares in stockings immediately before the broadcast, but this was never proved.

What did happen was that thousands of people gave it a try.  As we know, this technique has no chance of working, however it did give con men ideas.

In England, several of my family were taken in by fake color sheets of plastic. Smooth salesmen claimed that their gadget would turn black and white television instantly into color sets.' Just fix our plastic over the screen and see everything in color', they said.  In fact, all you got was a sort of green tinge, it made clouds seem like a chemical gas attack.

Television is a new medium. It's called a medium because nothing is well-done.  Fred Allen

Television enables you to be entertained in your home by people you wouldn't have in your home.  David Frost 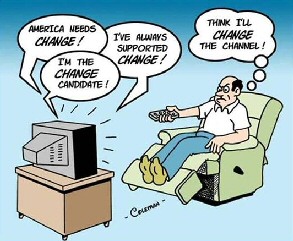 In March 2009 police in South Florida were swamped with calls about a gang initiation in which two women will be murdered in a Wal-Mart parking. The precise location varies, Palm Beach County and Miami-Dade are commonly cited, but rest assured all are a combination of hoaxes, well meaning people, or anxious relatives.

Will and Guy seem to remember a similar hoax about 4 years ago, except that time the targets were in Memphis.  Such events are not funny, just a waste of time and a drain on police resources.