Some of these factoids will bring a smile to your face.  Or maybe
you might like to surprise your friends with your new found knowledge?

Another Tranche of 10 Interesting Factoids 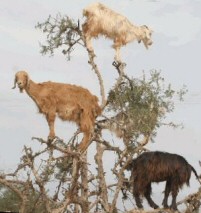 Argan Goats
You may be surprised to find that goats are able to climb trees.
Will and Guy have found out that in Morocco goats climb Argan trees to
consume delicious berries which are similar to olives. Local farmers
follow these goats because fruit of the Argan tree has the nut inside
which is used to make delicious cooking oil. Another interesting fact is
that Morocco goats spit or excrete these nuts, which then farmers use to
make the Argan oil. However, Argan trees are very close to extinction
because of the tree wood harvesting.

Flag Colours
The Official Olympic Flag Created by Pierre de
Coubertin in 1914, the Olympic flag contains five interconnected rings
on a white background. The five rings symbolize the five significant
continents and are interconnected to symbolize the friendship to be
gained from these international competitions. The rings, from left to
right, are blue, yellow, black, green, and red. These colours were
chosen because at least one of them appeared on the flag of every
country in the world. The Olympic flag was first flown during the 1920
Olympic Games. 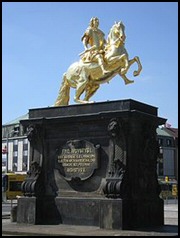 I studied in Dresden and the most famous statue there is the so called
"Golden Rider" it's a statue of August (called the strong).

You see the horse of this statue has both front legs in the air but
August the strong died from Diabetes mellitus, high blood pressure and other
things connected to the fact that he was too fat. So he didn't die in
battle, or would you call this a battle against weight!

Footnote:
Will and Guy would be interested in hearing
from American readers on this topic as the latest theory is that the 'Legs
in the Air' only applies to horse statues featuring Gettysburg soldiers.

Interesting Facts That Not a Lot of People Know

Footnote:
Please send us your selection of 10 interesting facts